Denmark: The Little Mermaid in Copenhagen

Today I got three postcards. One of them was my first postcard from Denmark. This week I bought a new album for bigger postcards, so now I can collect them too. The card shows the Little Mermaid in Copenhagen. The bronze is 1,25 meters high and thus the smallest town's landmark in the world. The design was made by Edvard Eriksen. The ideal for the bronze is Hans Christian Andersen's fairy tale "The Little Mermaid". 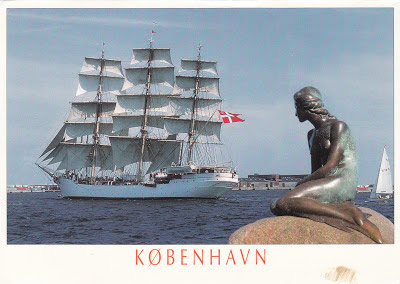 Thank You very much Chris!

Email ThisBlogThis!Share to TwitterShare to FacebookShare to Pinterest
Labels: *Capital Cities, ==Cards from my Wishlist, Denmark

Today I got three postcards. One of them was my first card from Italy. The card shows the Saint Peter's Square in Rome (actually in the Vatican, but the whole Vatican is in Rome!). The Square was built in front of the Saint Peter's Basilica (the building in the background) between 1656 and 1667. 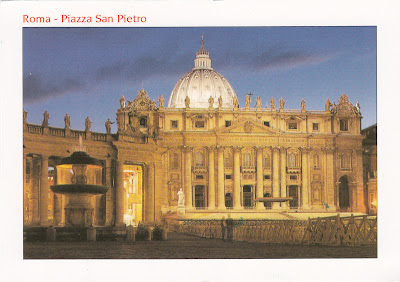 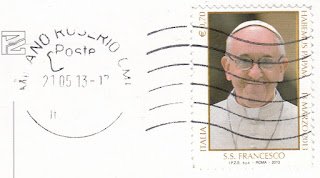 Thank You very much Giuseppe!

Today I got three postcards. Two of them were from new countries and one was from Hong Kong. I do not know what the card shows, but it looks really nice. 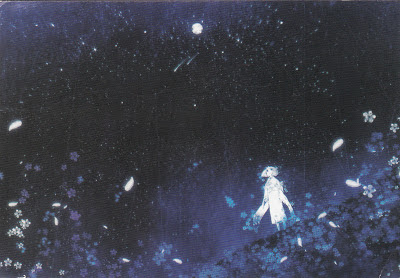 Thank You so much John!
Eingestellt von dustin15 um 15:09 No comments:

cover and stamp from Italy 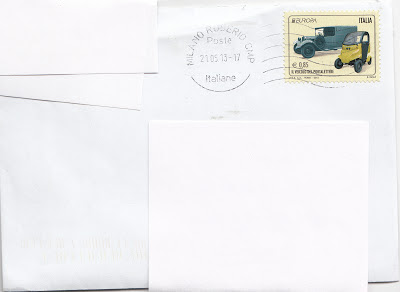 Inside the cover was the Italian stamp celebrating the new Pope (issued 02-05-2013)! It is a joint issue with Argentina and the Vatican State. The text HABEMUS PAPAM on the stamp is Latin and means "We have a (new) Pope".
The new pope is called Francis, but his civic name is Jorge Mario Bergoglio. He was born in Buenos Aires, Argentina, on 17th December 1936. He is the pope since the 13rd March 2013 after Pope Benedict XVI had abdicated (the first abdication since 1294!). He is the first pope from South America. 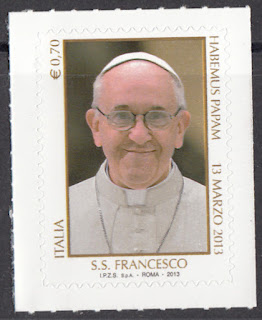 Some weeks ago I bought the German stamps celebrating the 150th anniversary of the foundation of the Red Cross (issued 04-04-2013). In 1859 the Swiss salesman Henry Dunant was part of Battle of Solferino where 6 000 soldiers were killed and 25 000 were injured and he was appalled that nobody could help them.  So he wrote a book about the battle sent by him to leading figures in whole Europe. Furthermore, he wants to close a contract protecting the neutrality of the invalids, the people helping them and the facilities adapted for them. In 1863 he founded together with four other citizen the Committee of the Five. At the Committee' s suggestion there was the first international conference to found a organisation to manage this exercise. 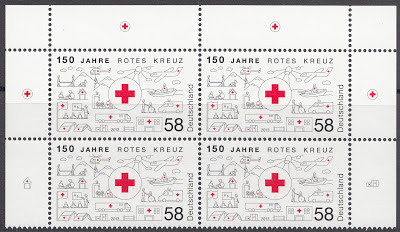 Yesterday I got a postcard showing the Hindenburgdamm which I sent to me when I was on Sylt. The Hindenburgdamm was built between 1923 and 1927. It was opened on 1st June 1927 and is named after Paul von Hindenburg (former Reich President) having opened the dam and having been the first voyager. 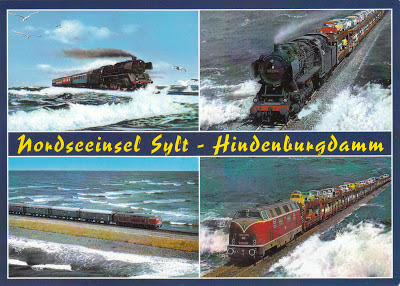 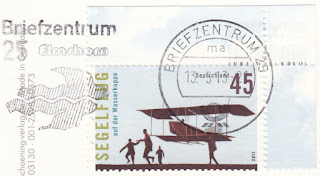 On Monday I got two postcards: one from Russia and my first postcard from Estonia. The postcard from Estonia shows Toompea in Estonia's capital Tallinn. In Toompea Castle topped by the Tall Hermann is the official residence of the parliament of Estonia (Riigikogu). Toompea is part of the old town of Tallinn and thus since 1997 a UNESCO World Heritage Site. 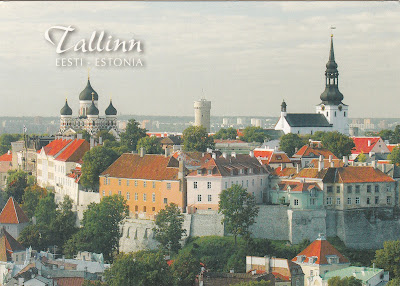 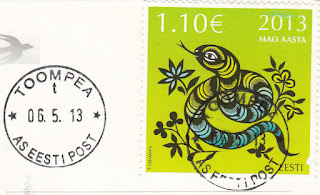 Thank You so much for this great postcard Heidi!
Eingestellt von dustin15 um 11:33 No comments:

On Monday I got two postcards: my first from Estonia and one from Russia. The card from Russia shows the Saint Basil's Cathedral in Russia's capital Moscow. It was built between 1555 and 1561 in orders from Ivan the Terrible. In the background you can see the Red Square being a UNESCO World Heritage since 1990 and the eastern Kremlin Wall. 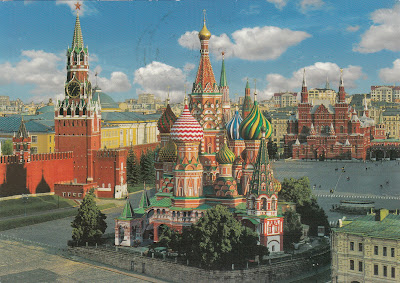 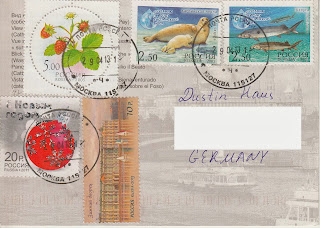 Thank You so much for the great card and stamps Irina!

On Wednesday I got four postcards and one cover. The cover was from Slovenia 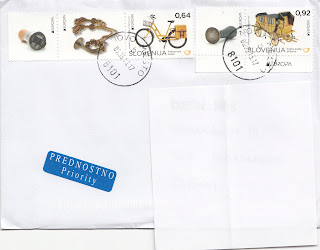 Thank You so much Mateja!
Eingestellt von dustin15 um 17:48 No comments:

On Wednesday I got four postcards and three of them were from new countries. One new country was Finland. The postcard shows a Moomin. The Moomins are figures in many children's books written by Tove Jansson and in a telecast. 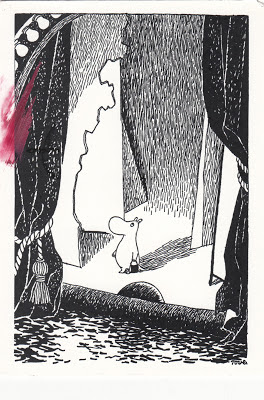 With great matching stamp:
Moomins-Moominpappa (from set of six) (issued 06-05-2013)
with First day special postmark
and with new Moomin Prioritylabel! 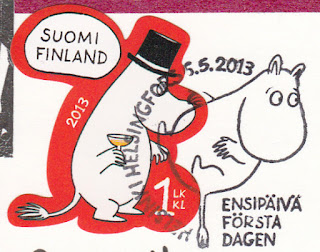 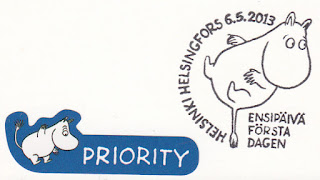 Thank You so much for this great postcard Maarit!

On Wednesday I got four postcards and three of them were from new countries. One new country were the Åland Islands.  Åland is autonomous and demilitarised region of Finland with a Swedish-speaking population.

The sender said that the card not really shows Åland but it really looks like it! 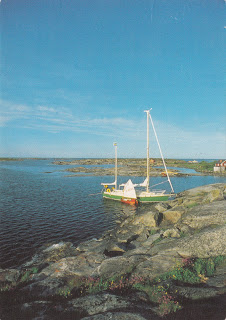 With great stamp:
Åland seen by Marcus Grönholm (issued 26-07-2008)
(the street on the stamp is rough so you can feel it)
with special postmark from the ferry between Mariehamn (Åland's capital) and Kapellskär (in Sweden) 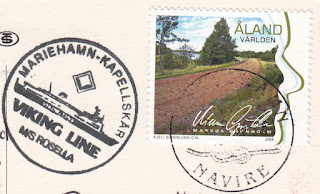 Thank You so much for this great postcard Leila!!
Eingestellt von dustin15 um 17:32 No comments:

On Wednesday I got four postcards. Three of them were from new countries and one was from Belarus. The card from Belarus shows Holidays in Belarus. It shows Kaliaday, Spring greeting, Kupalle and Dazhynki. 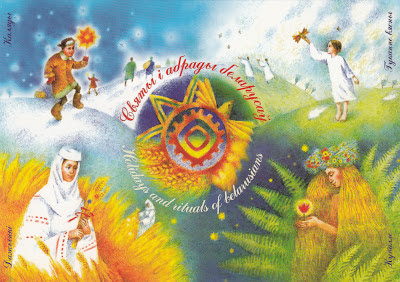 Thank You so much Victoria!

On Wednesday I got four postcards and three of them were from new countries! One new country was Brazil! The cards shows the Copacabana beach in Rio de Janeiro. It is one of the most famous beaches in the world. And in the back ground is the Sugarloaf Mountain. Since 2012 is Rio de Janeiro a UNESCO World Heritage Site. 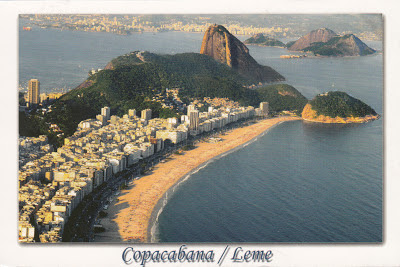 With many great stamps:
International Polar Year (issued 18-03-2009)
and other colourful stamps! 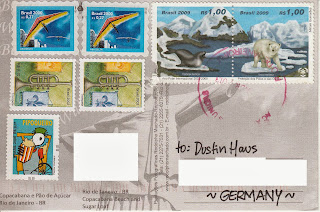 Thank You very much for this great postcard Christina!

On Thursday I got a new postcard from my mum. The postcard shows the Leipzig/Halle Airport being located between the big towns of Leipzig and Halle (Saale) in Saxony. The airport was commissioned in 1927. The airport is measured in passengers the 14th largest airport in Germany, but in charge the 2nd largest 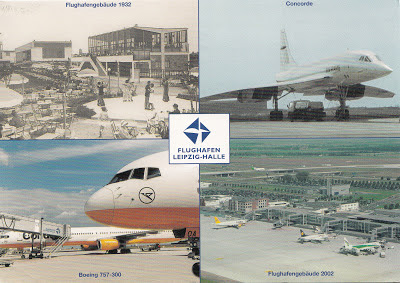 On Tuesday I got two cards one from Germany and one from Japan. The postcard from Germany shows the Margravial Opera House in Bayreuth. It was built between 1745 and 1748 by Joseph Saint-Pierre and the interior is designed by Giuseppe Galli Bibiena and his son Carlo. The woman on the card is Wilhelmine of  Prussia, Margravine of Brandenburg-Bayreuth, a sister of Frederick the Great. The Margravial Opera House is since 2012 a UNESCO World Heritage Site. 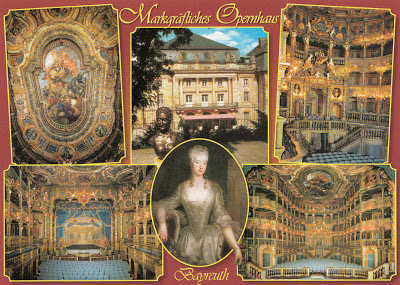 Thank you so much for this great card Natalie!

On Tuesday I got two cards one from Japan and one from Germany. The postcard from Japan shows Totoro and is a new one for my Totoro collection. The text on the card means "Thank you every one". 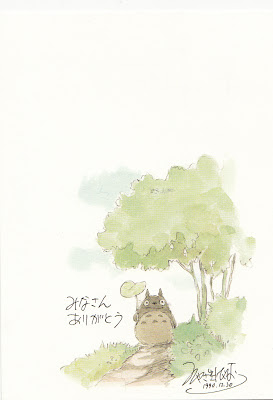 Thank You so much Ai!