Today I got a postcard from the Netherlands.

The card comes from Schagen and shows among others the Grote Kerk and one of the towers of the castle. 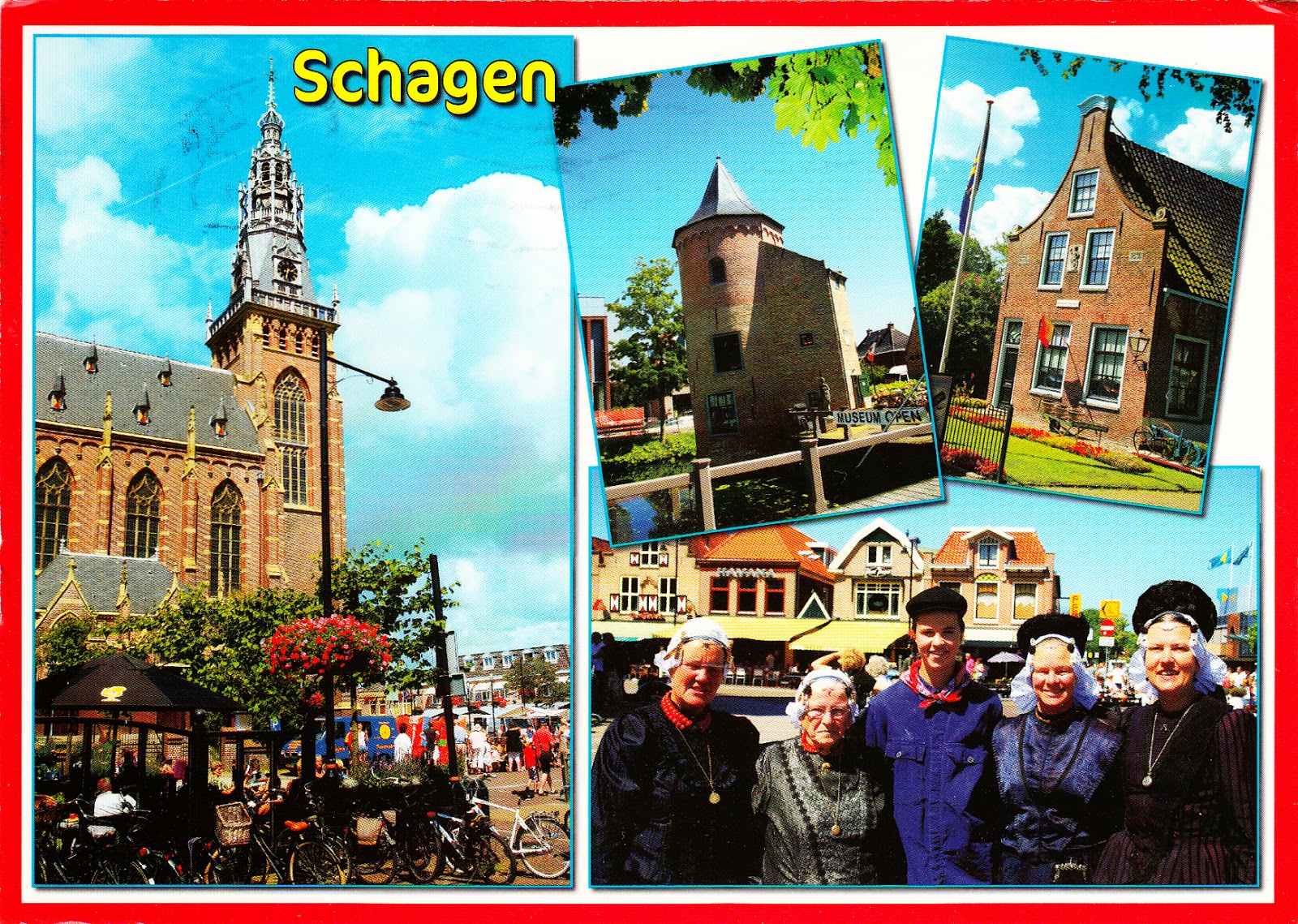 Email ThisBlogThis!Share to TwitterShare to FacebookShare to Pinterest
Labels: Netherlands

Today I got two postcards: one from Japan and one from New Zealand.

The card from Japan shows the Yasaka Pagoda in Kyoto. 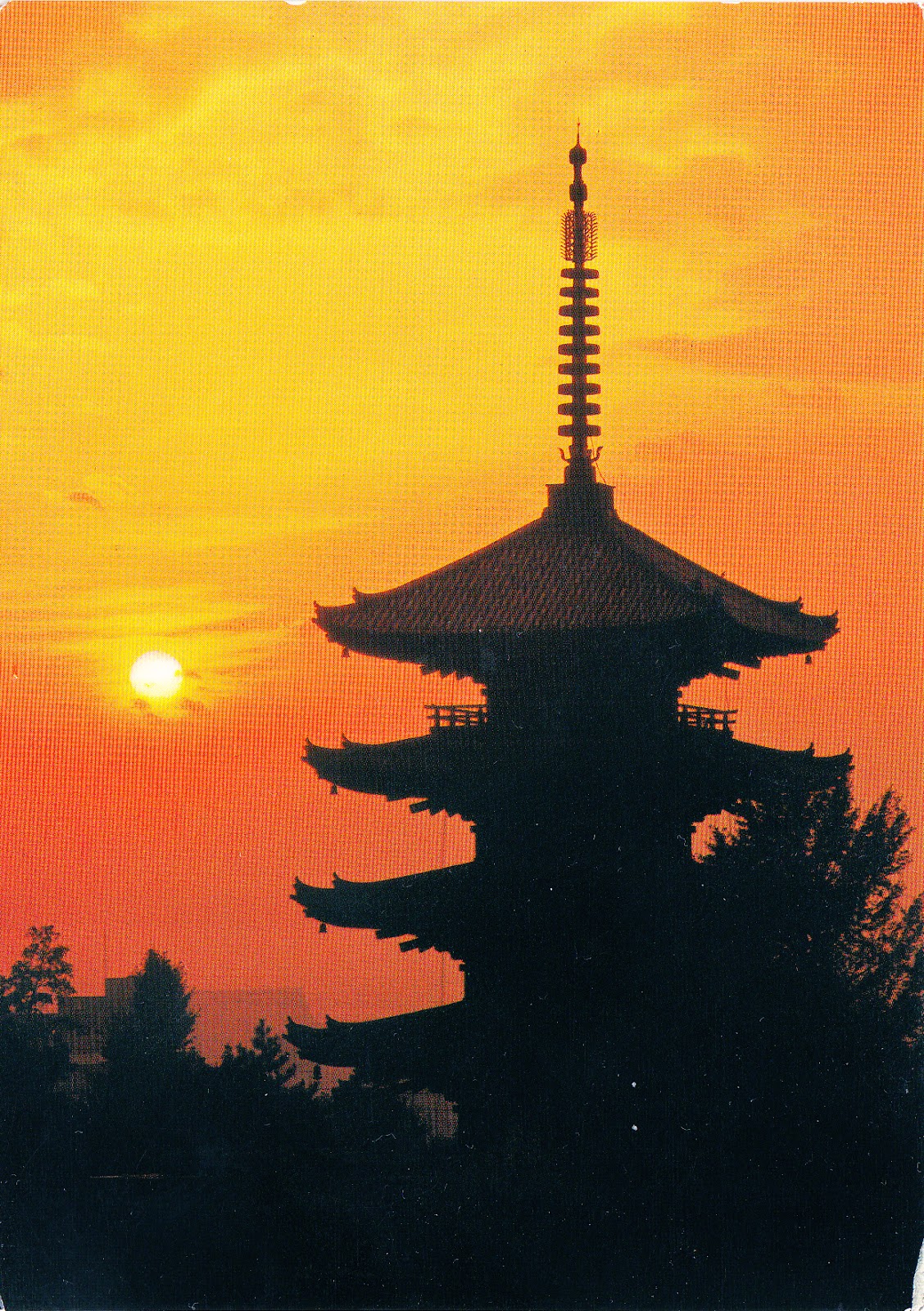 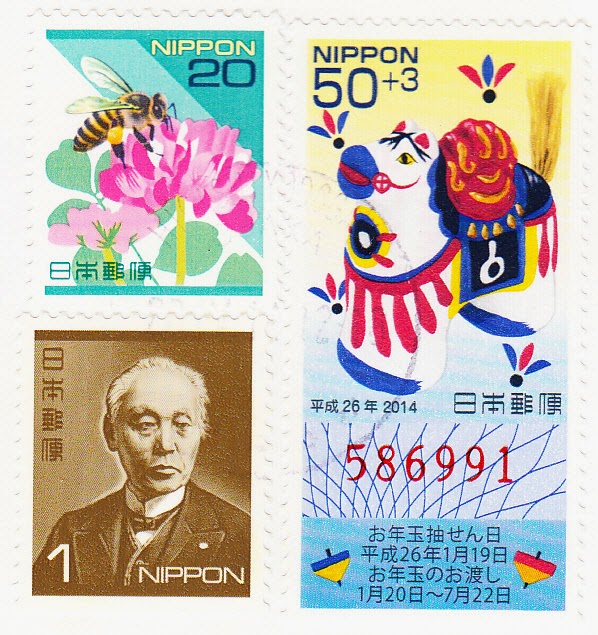 Today I got two postcards: one from New Zealand and one from Japan. 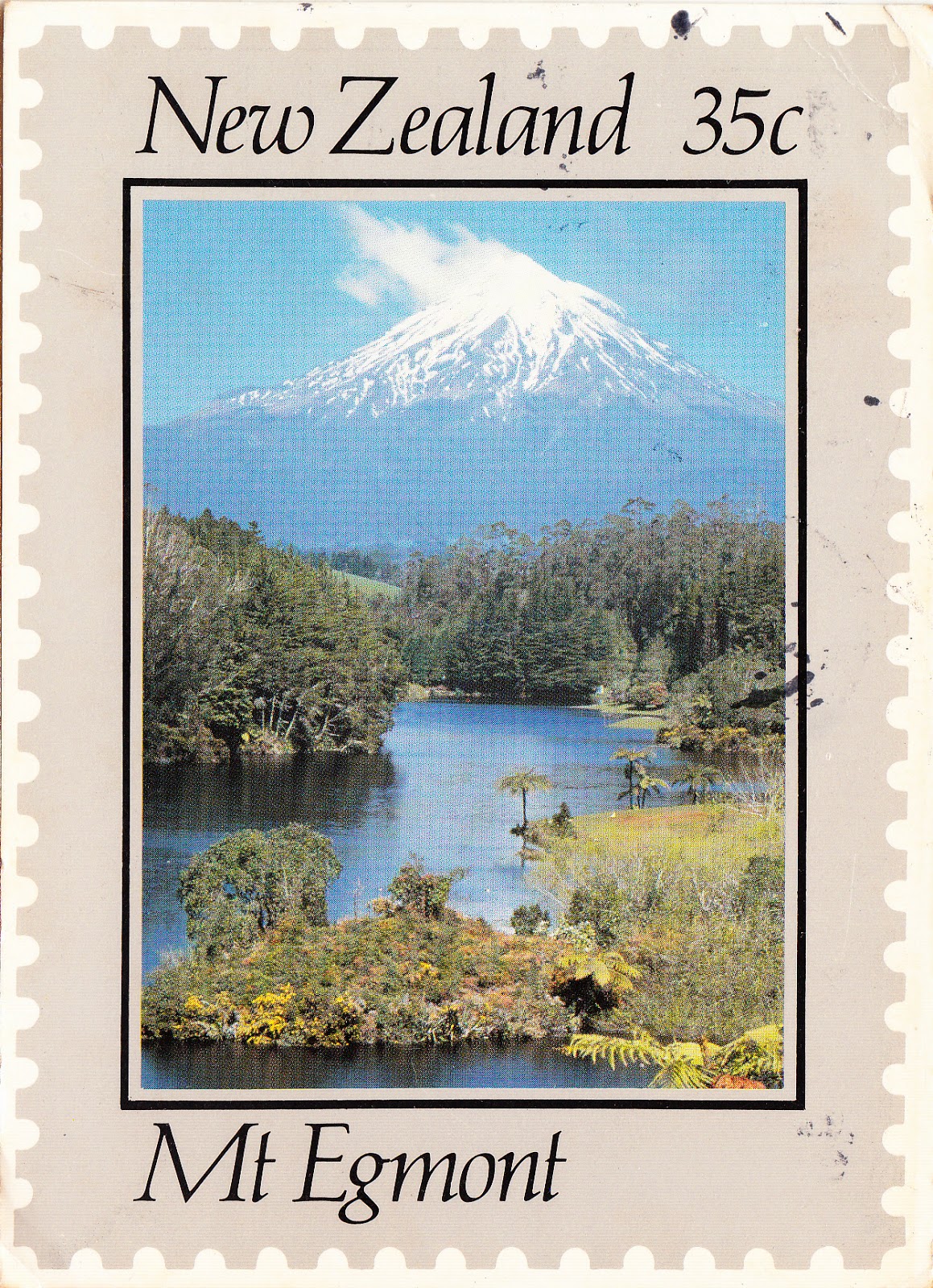 Today I got a postcard from Thailand.

The card shows the Khaolak Beach in the Phang Nga Province. 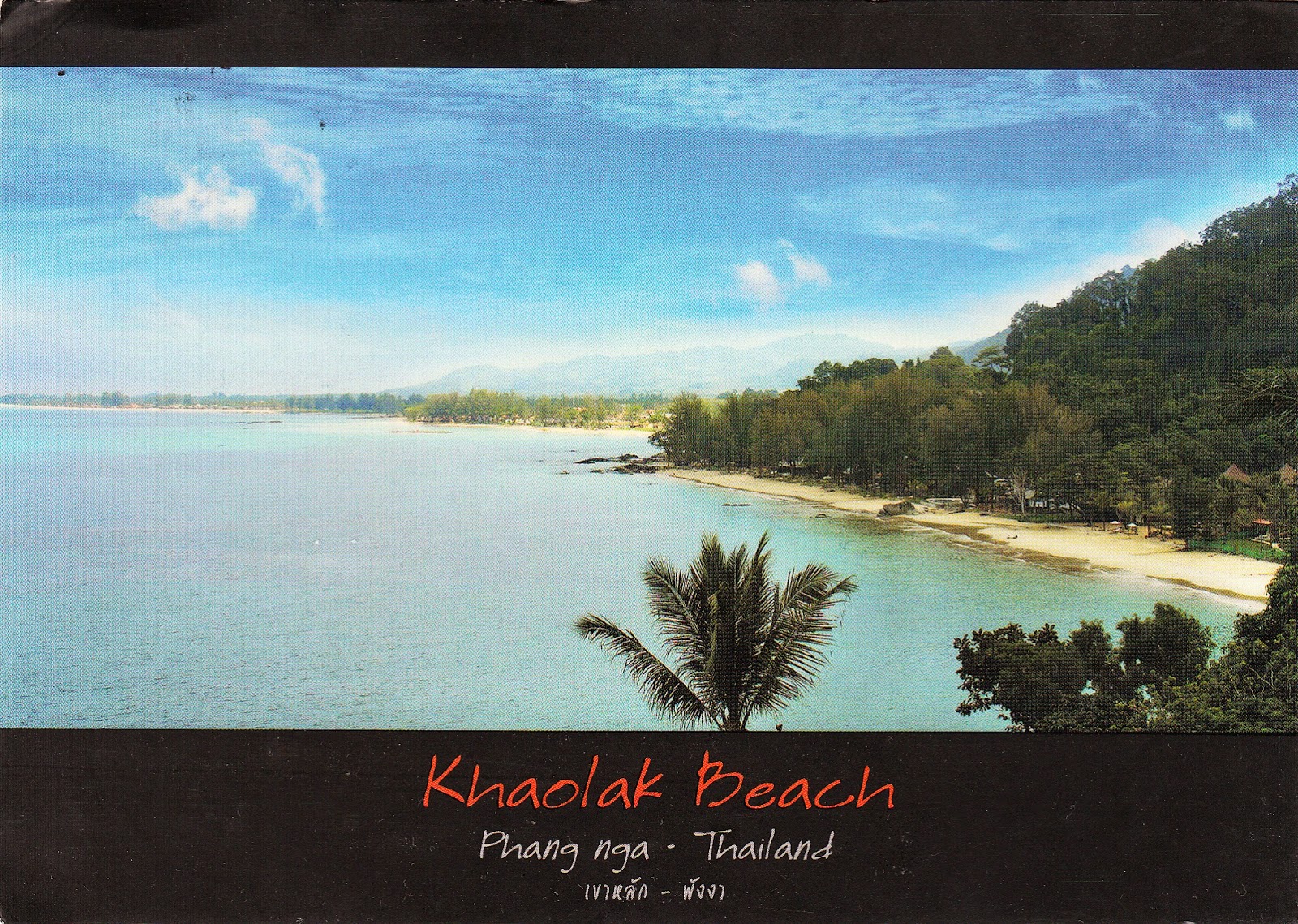 Email ThisBlogThis!Share to TwitterShare to FacebookShare to Pinterest
Labels: Thailand

Today I got two postcards from Thailand.

One of the cards shows the Chinese-style royal palace Wehart Chamrun being a part of the Bang Pa-In Palace. The Palace is located in the Ayutthaya Province and was formerly used by the Thai kings. The Palace was originally constructed in 1632, but was not used from the late 18th century until the mid-19th century when it was restored by King Mongkut. 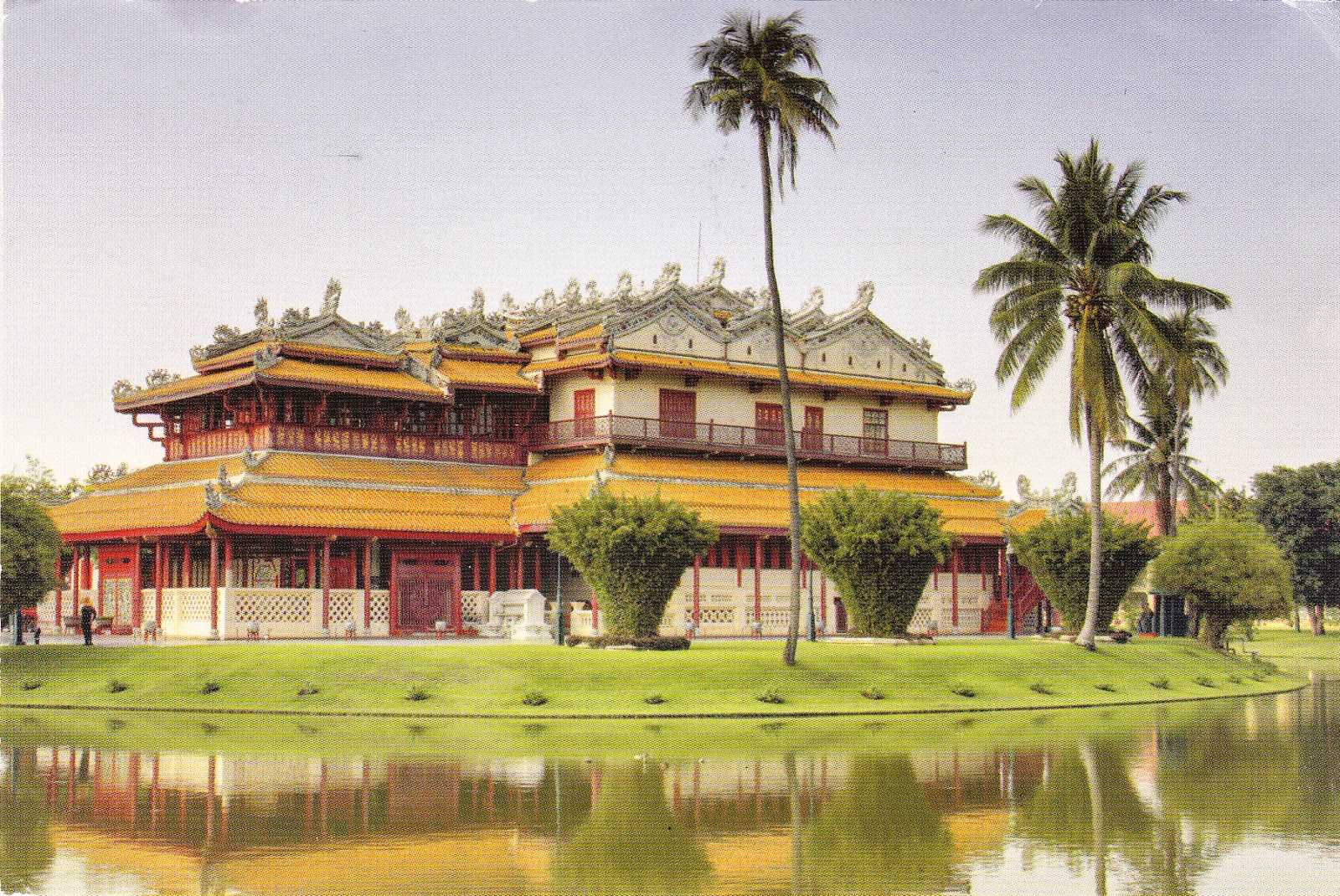 Today I got two postcards from Thailand.

One of them shows Hong Island in the Krabi Province. 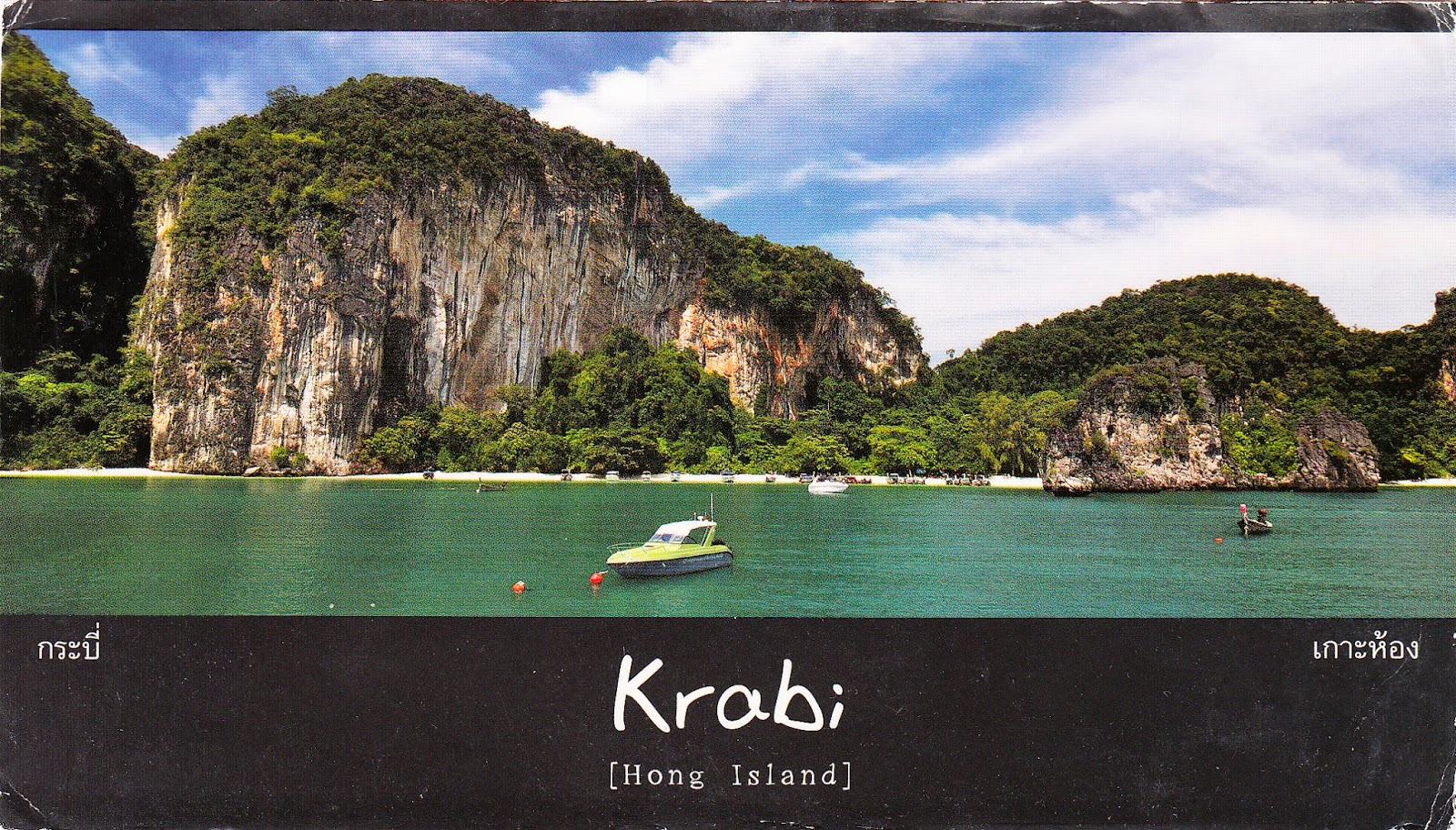 Email ThisBlogThis!Share to TwitterShare to FacebookShare to Pinterest
Labels: Thailand

Today I got a postcard from Hong Kong.

The card shows a firework over the Victoria Harbour. 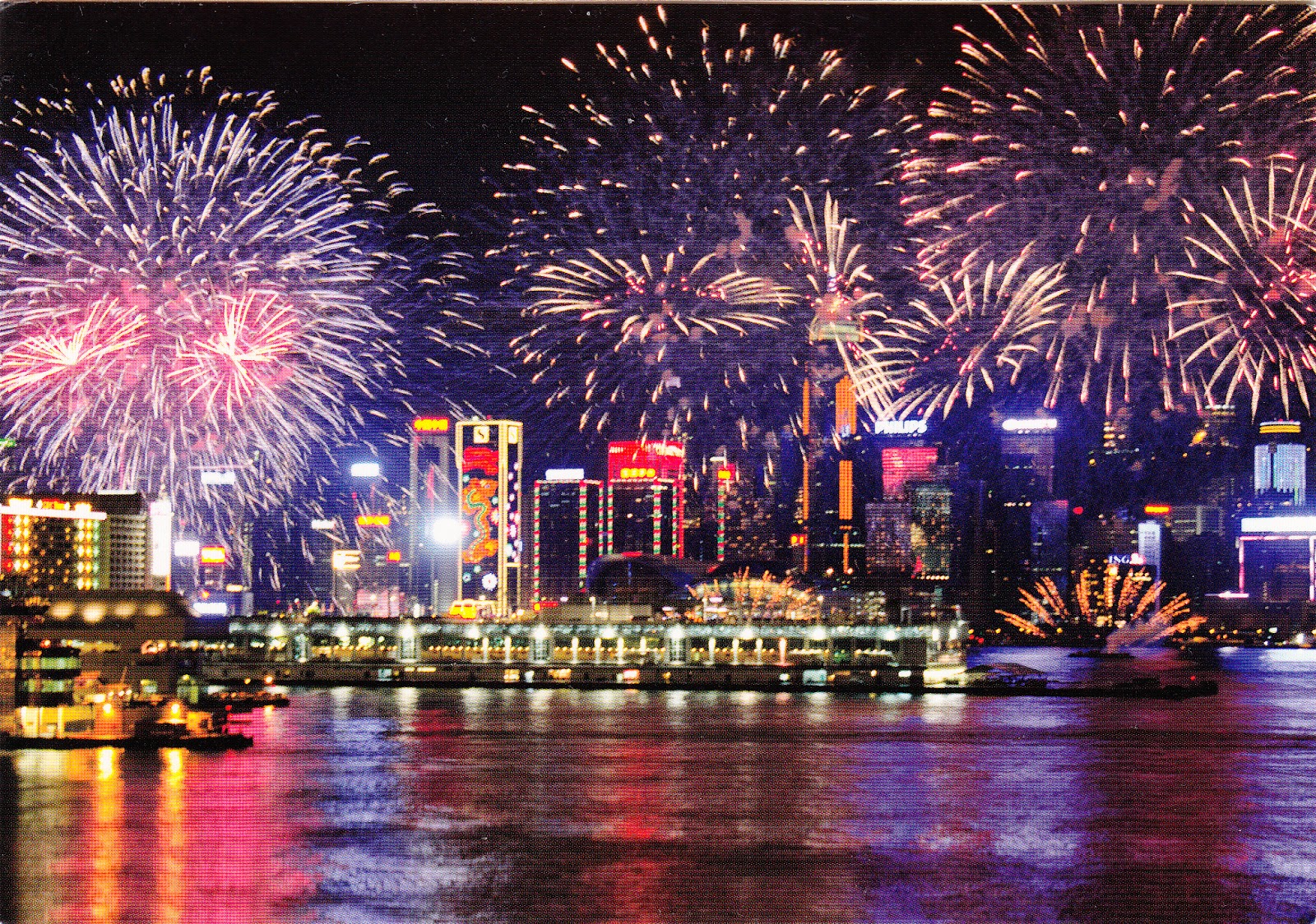 With special stamp:
Weather Phenomena-Typhoon (issued 27-03-2014)
On the stamp is a flip image.
with a special postmark showing the Tsim Sha Tsui Clock Tower 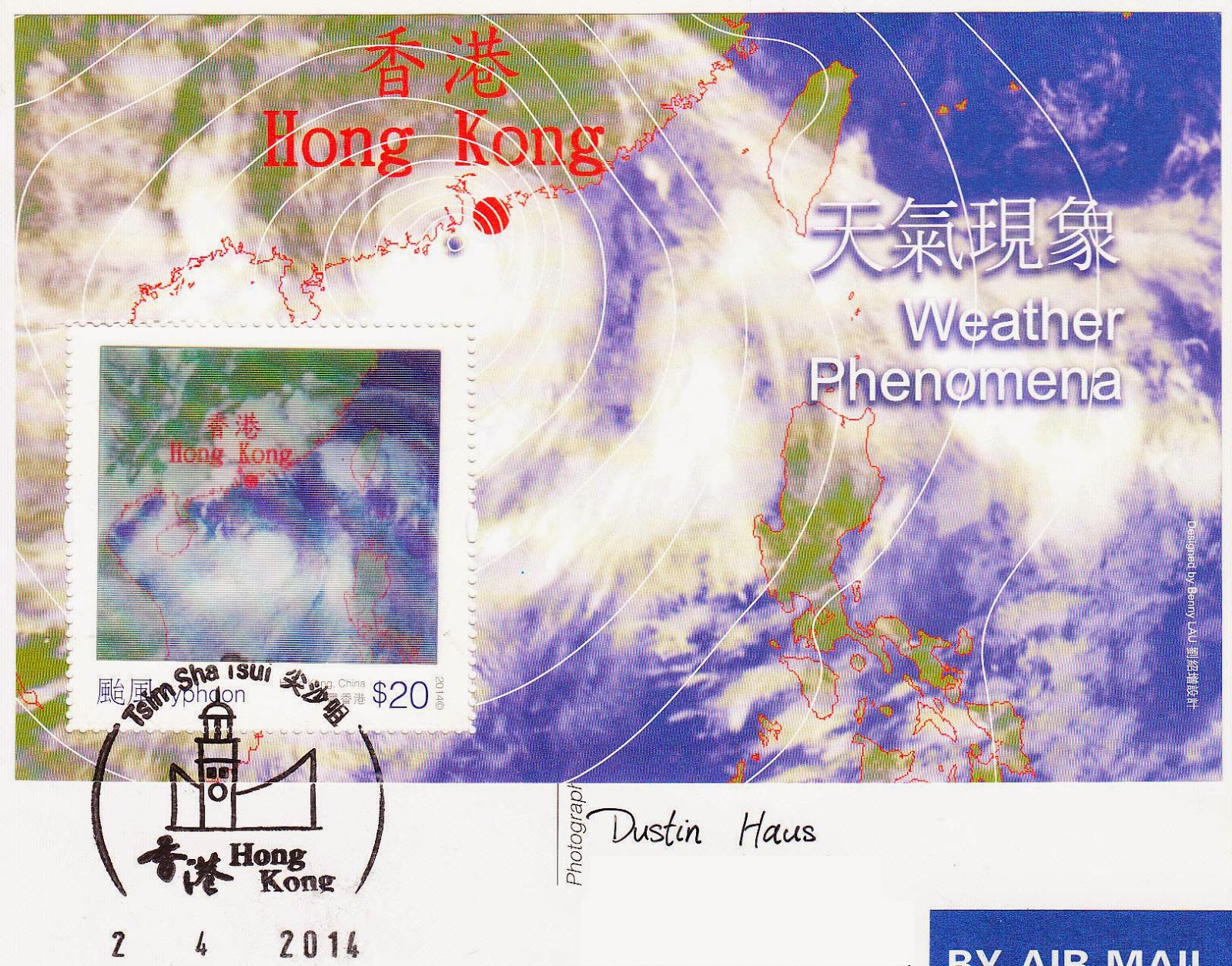 Today I got a cover from Hong Kong with a great stamp set inside.

Today I got a postcard from New Zealand.

The card shows a tram in Christchurch. Christchurch is the largest city on the South Island and New Zealand's third-most populous urban area. The electric trams ran in Christchurch from 1905 to 1954 until they were replaced by buses. In 1995 opened a central city loop heritage tram system. It is 2,5km long. The tram on the card is No. 11 built in 1903 and thus being the oldest electric tram. It was rediscovered in the mid 1960s rotting on a hill. 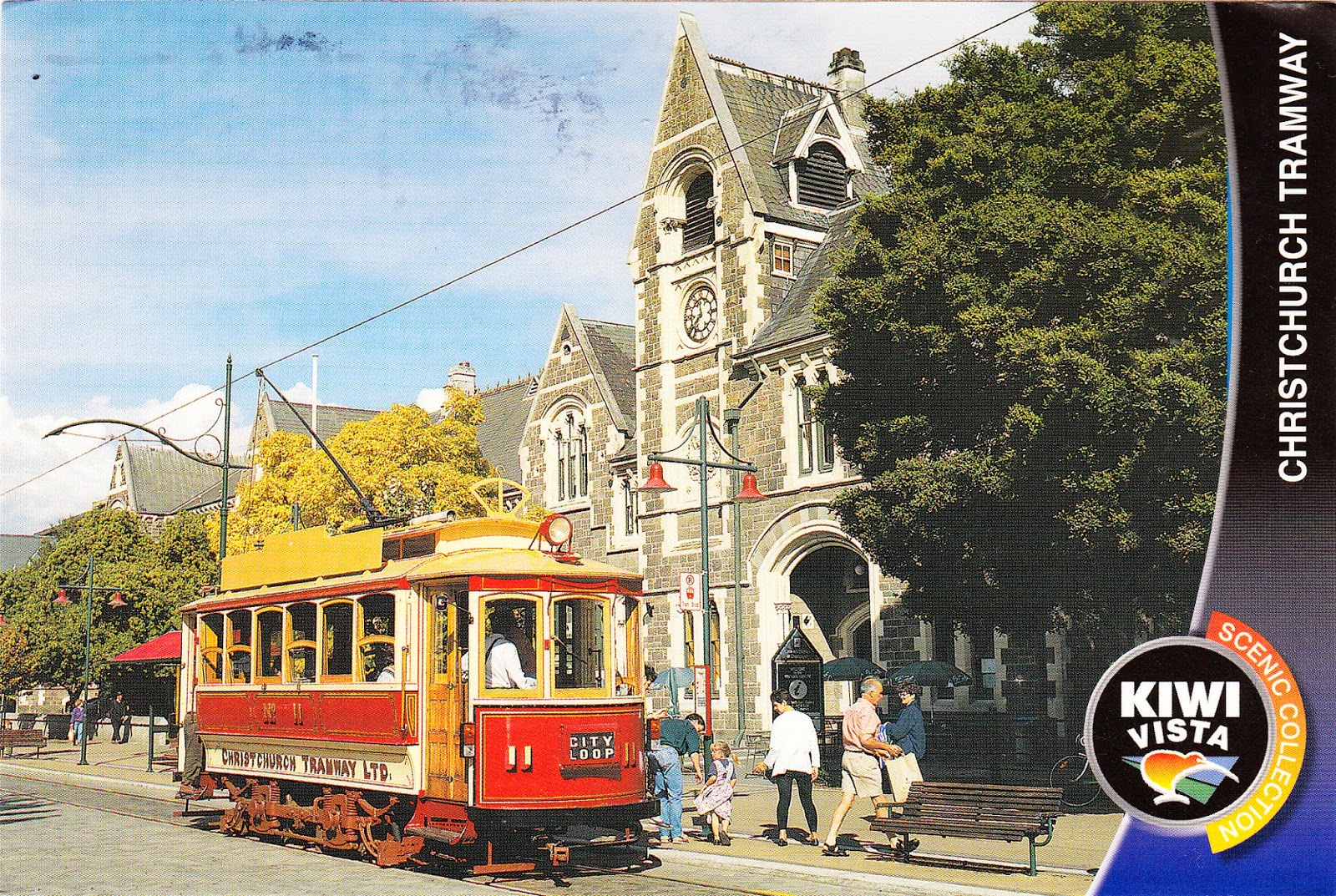 Stamps:
Royal Visit 2014 (from set of two) (issued 07-04-2014)
The Royal Visit of the Duke and Duchess of Cambridge to New Zealand and Australia is the first royal tour of them as married couple. The stamp shows a photo taken after the birth of Prince George in the garden of the Middleton family home in August 2013.
ANZAC-WWII Poster Art (two from set of six) (issued 02-04-2014)
The left stamp shows a poster of the Women's Land Service. It was established in 1940 to meet the shortage of male farming labour caused by conscription in New Zealand. The right stamp shows a poster of the Air Training Corps. It was established in 1941 to ensure there were enough future recruits to fill the Royal New Zealand Air Force ranks.

Today I got three postcards: one from Belgium, one from Japan and one from Estonia. 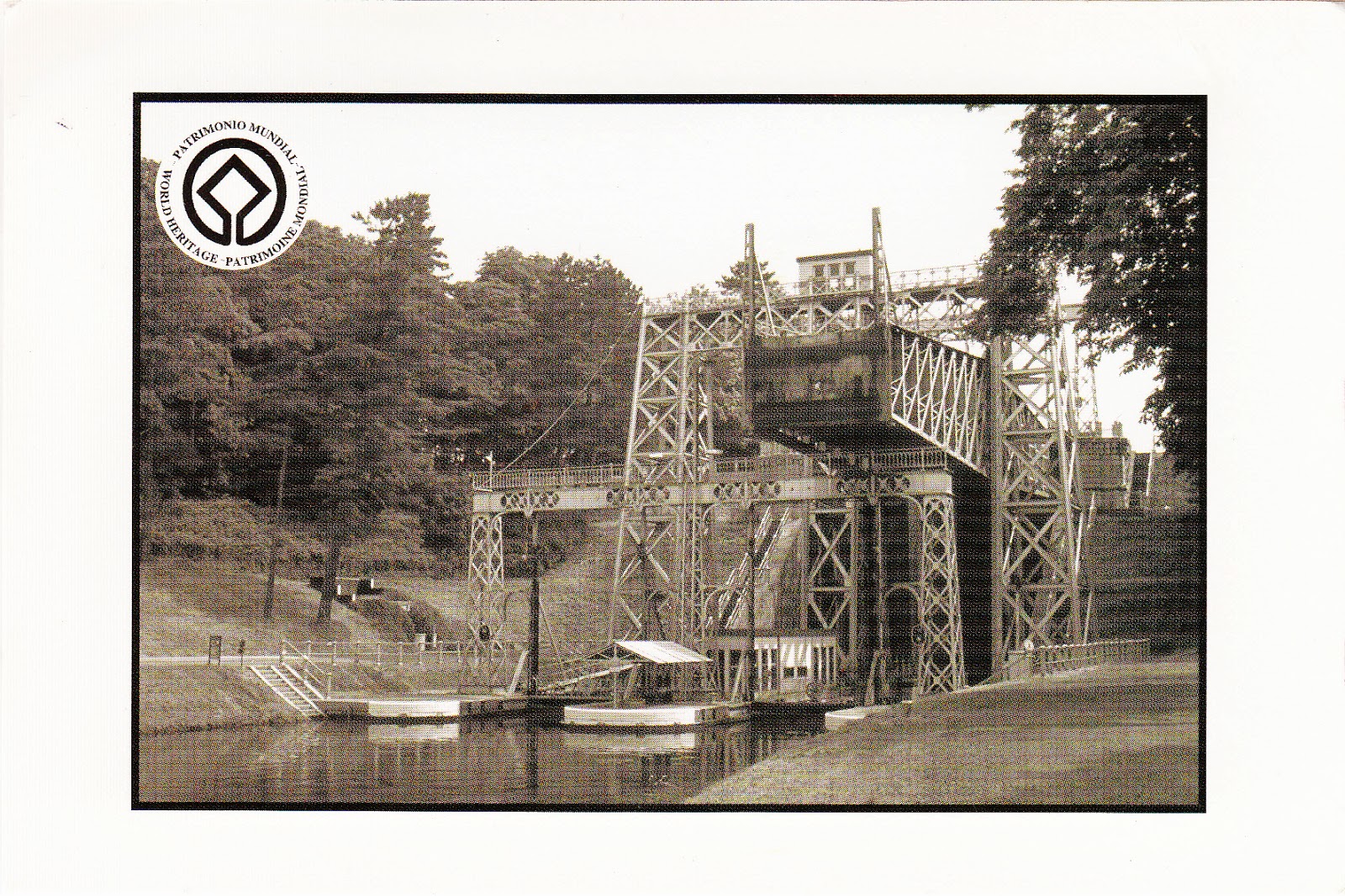 With very special stamps:
Queen Elizabeth of Belgium (issued 22-05-1976)
Belgian Chocolate (from set of five) (25-03-2013)
The stamp smells of chocolate and allegedly the glue shall savour like chocolate.

Today I got three postcards: one from Estonia, one from Belgium and one from Japan.

The card from Estonia shows the monument "Kissing Students" in front of Tartu's Town Hall. Tartu is the second largest city of Estonia and is considered as Estonia's intellectual centre. Tartu is home to the University of Tartu, Estonia's oldest university, to the Supreme Court of Estonia and to the Ministry of Education and Research. 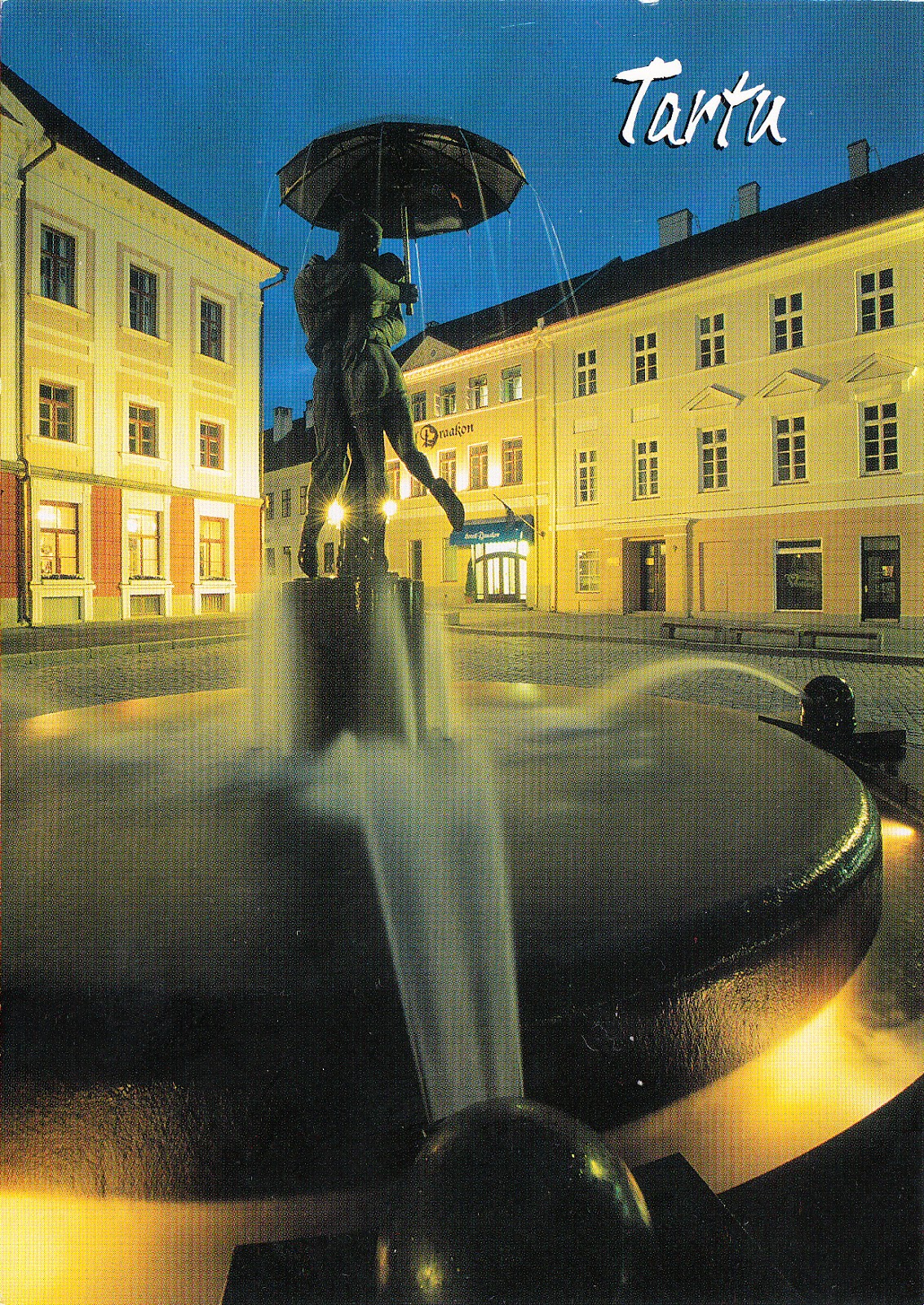 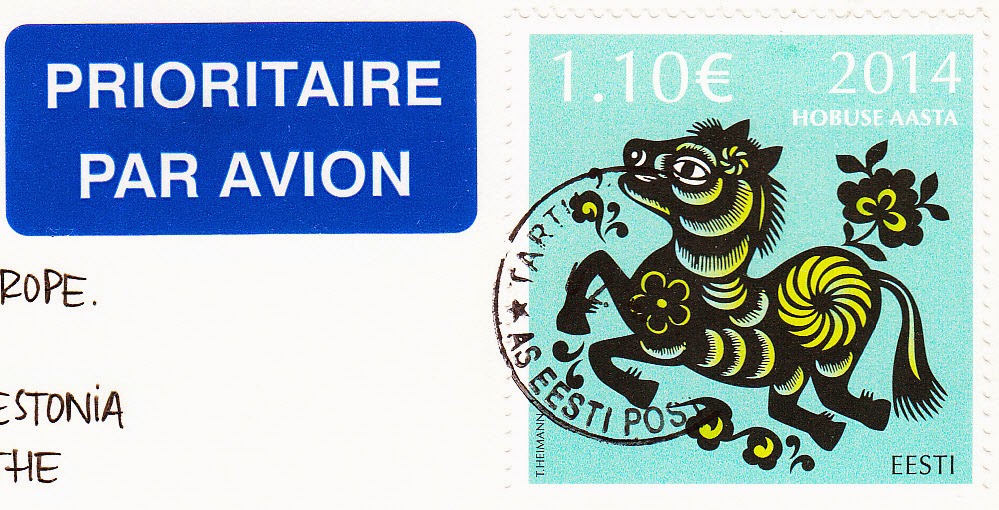 Thank You very much Triin!

Email ThisBlogThis!Share to TwitterShare to FacebookShare to Pinterest
Labels: *2014 Year of the Horse, Estonia

Today I got three postcards: one from Japan, one from Estonia and one from Belgium.

The card from Japan shows the Fukuroda Falls in the Ibaraki Prefecture. They are 73m wide and 120m high. The source of the Taki River is just above the Fukuroda Falls. After the Kegon Falls and the Nachi Falls they are ranked as the third most beautiful waterfall in Japan. 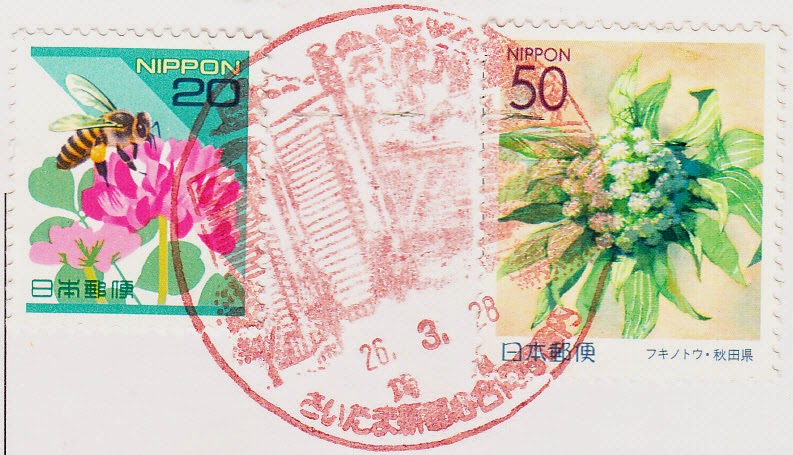 Today I got two postcards: one from Japan and my first card from Hungary.

The card from Japan comes from Kawagoe in the Saitama Prefecture. Kawagoe is about 30min train ride from Tokyo and is also known as Little Edo. The tower in the background is the Bell of Time. The Bell of Time was originally built between 1624 and 1644 by the order of Sakai Tadakatsu but had to be rebuilt in 1894 after it was destroyed by the Great Fire of Kawagoe. 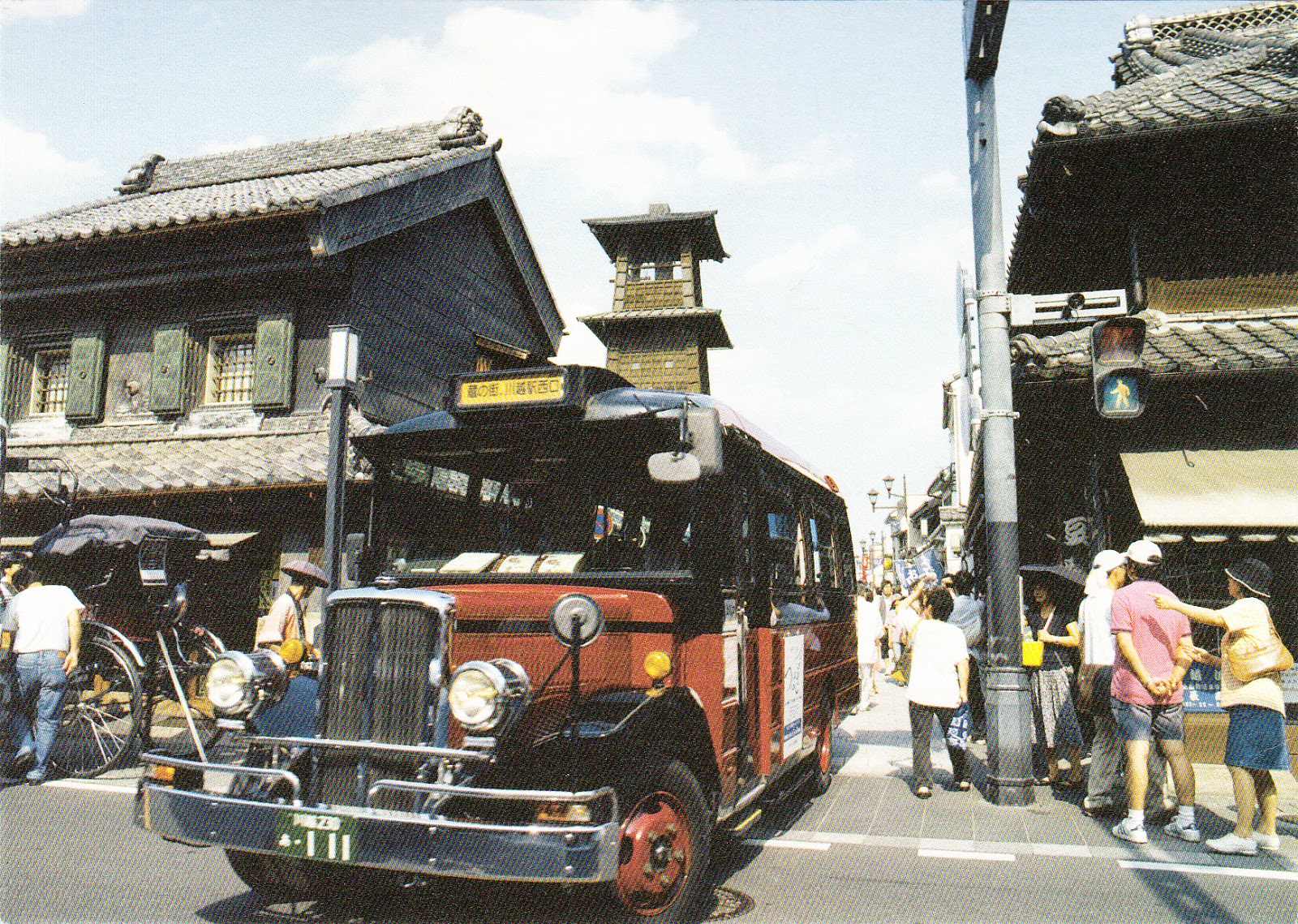 With nice stamps:
Hello Kitty (two from set of fifteen) (issued 22-06-2012)
Hello Kitty appeared for the first time in 1974 and was designed by Yuko Shimizu. Hello Kitty represents a female white Japanese bobtail cat. She is merchandised by Sanrio.
with special postmark showing among others a fox 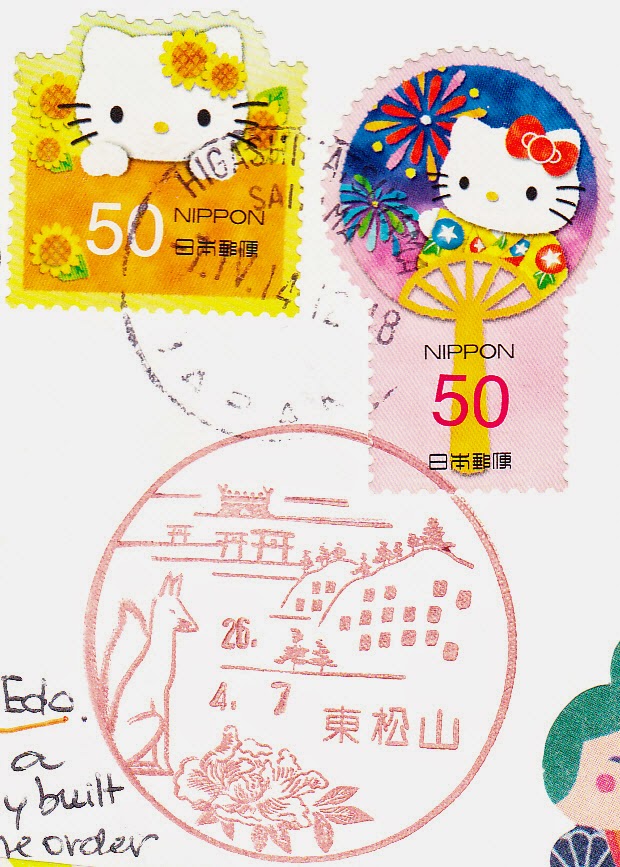 Today I got two postcards: my first card from Hungary (60th country) and one from Japan.

Hungary is a country in Central Europe bordering on Slovakia, Ukraine, Romania, Serbia, Croatia, Slovenia and Austria. Hungary is a member of the EU, of the NATO, of the OECD and of the UN. Hungary's capital is Budapest.

The card is a multiview from Nyíregyháza. Nyíregyháza is the seventh largest city in Hungary. One of the pictures shows a polar bear at the Nyíregyháza Zoo. The Zoo is recognised throughout Europe and is a member of the World Association of Zoos and Aquariums (WAZA). On the card is also a map of Hungary coloured in the colours of the Hungarian flag with the location of Nyíregyháza. 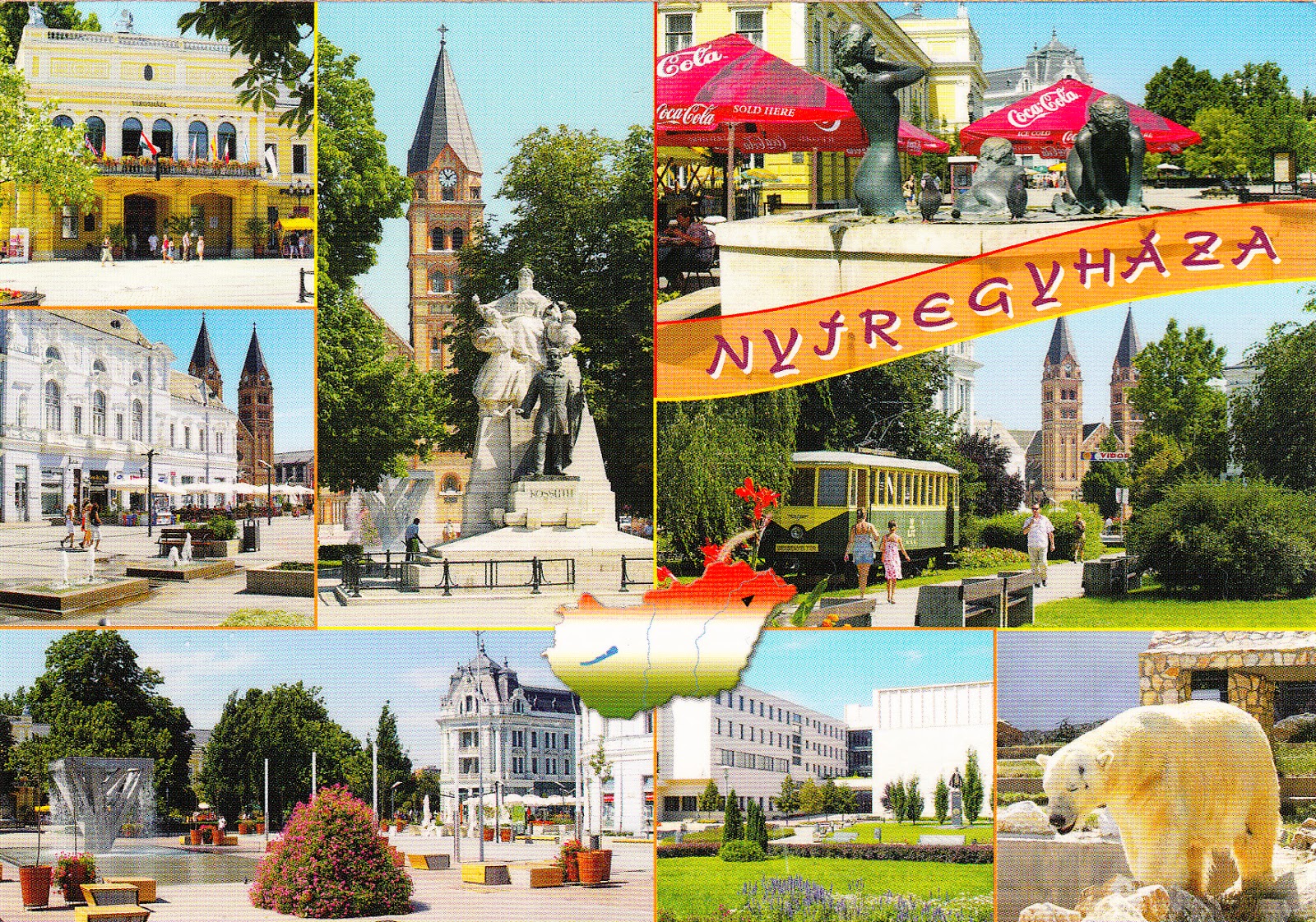 Email ThisBlogThis!Share to TwitterShare to FacebookShare to Pinterest
Labels: Hungary

Yesterday I got a postcard from Japan.

The card is a map card showing Japan's largest islands, Honshu, Hokkaido, Kyushu and Shukoku, divided in 47 prefectures. Japan is a insular state in East Asia. Japan has the world's tenth-largest population (126000000 people) and the Greater Tokyo Area (more than 30000000 people) is the largest metropolitan area in the world. Japan has the world's third-largest economy. Japan is a member of the OECD, of the G8 and of the UN. Japan's head of state is Emperor Akihito and the capital of Japan is Tokyo. 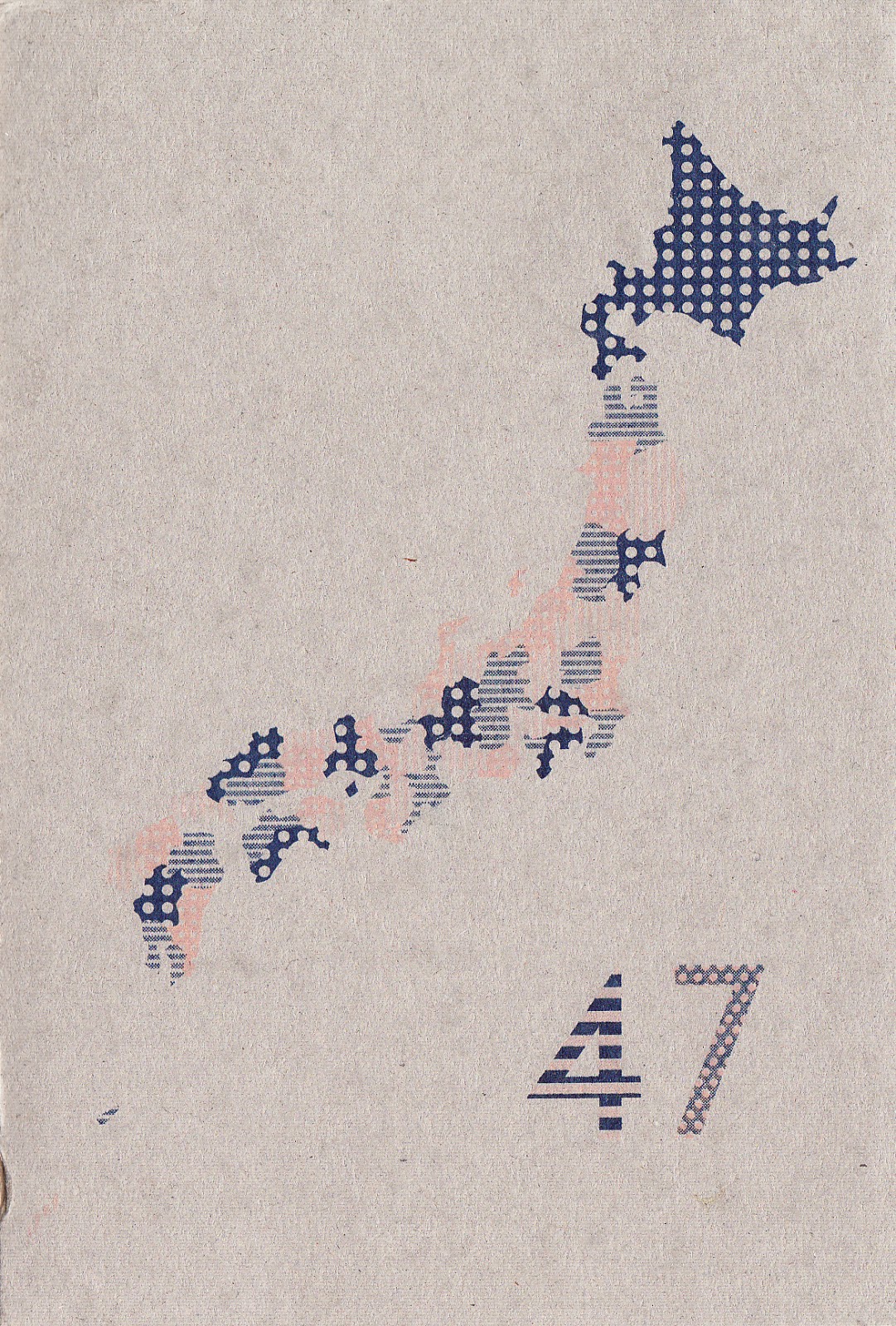 Stamp:
Japan's 50th anniversary as member of the OECD (from set of two) (issued 02-04-2014)
The Organization for Economic Co-operation and Development originated as Organisation for European Economic Co-operation (OEEC) in 1948. The main task of the OEEC was to help to manage the Marshall Plan. The OECD was founded in 1961 as a forum of countries committed to democracy and the market economy. In 1964 Japan was the first non-European country after the USA and Canada (founding member countries) joining the OECD.
with First Day Special Postmark
The stamp and the postmark show the Château de la Muette, OECD's headquarters. 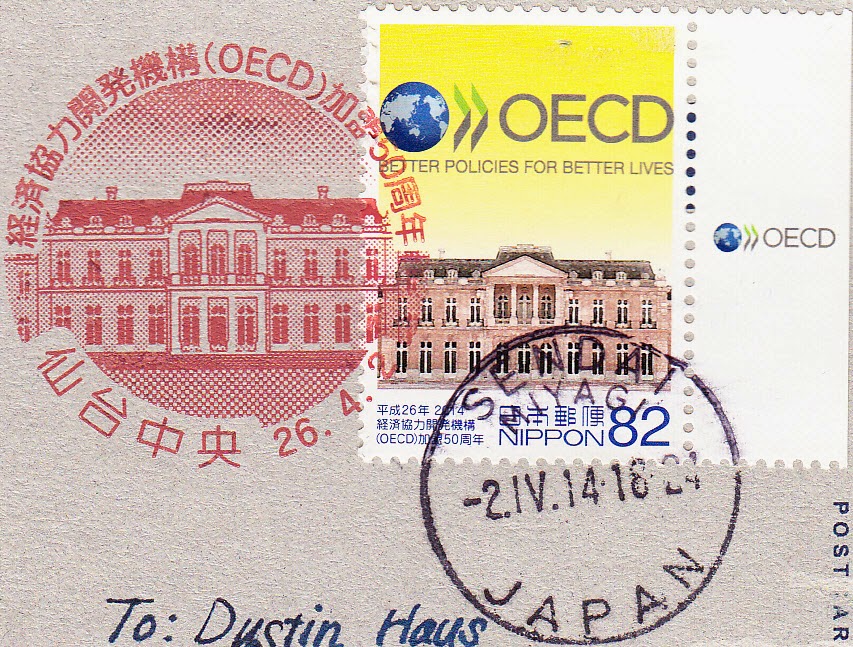 Today I got two postcards from Germany. I sent both to the postmarking units of the Deutsche Post to get special postmark.

One of them I got a few ago in an envelope. It shows the Posttower in Bonn.

The Federal City of Bonn in North Rhine-Westphalia hosted in 1949 the Parliamentary Council drafting and adopting the Basic Law for the Federal Republic of Germany. Bonn was from 1949 to 1990 the capital of West Germany and until 1999 the seat of the Government of the reunited Germany. Today is Bonn the second official residence of the President of Germany, the Chancellor of Germany, the Bundesrat, and the first official seat of six German federal ministries. Bonn is also home to the two DAX-listed corporations Deutsche Post DHL and Deutsche Telekom and to 19 United Nations institutions. In 1770 Ludwig van Beethoven was born in Bonn.

The Posttower in Bonn is the headquarter of the Deutsche Post DHL. It is 162,5m high and thus the highest building in North Rhine-Westphalia and the highest German skyscraper outside of Frankfurt am Main. 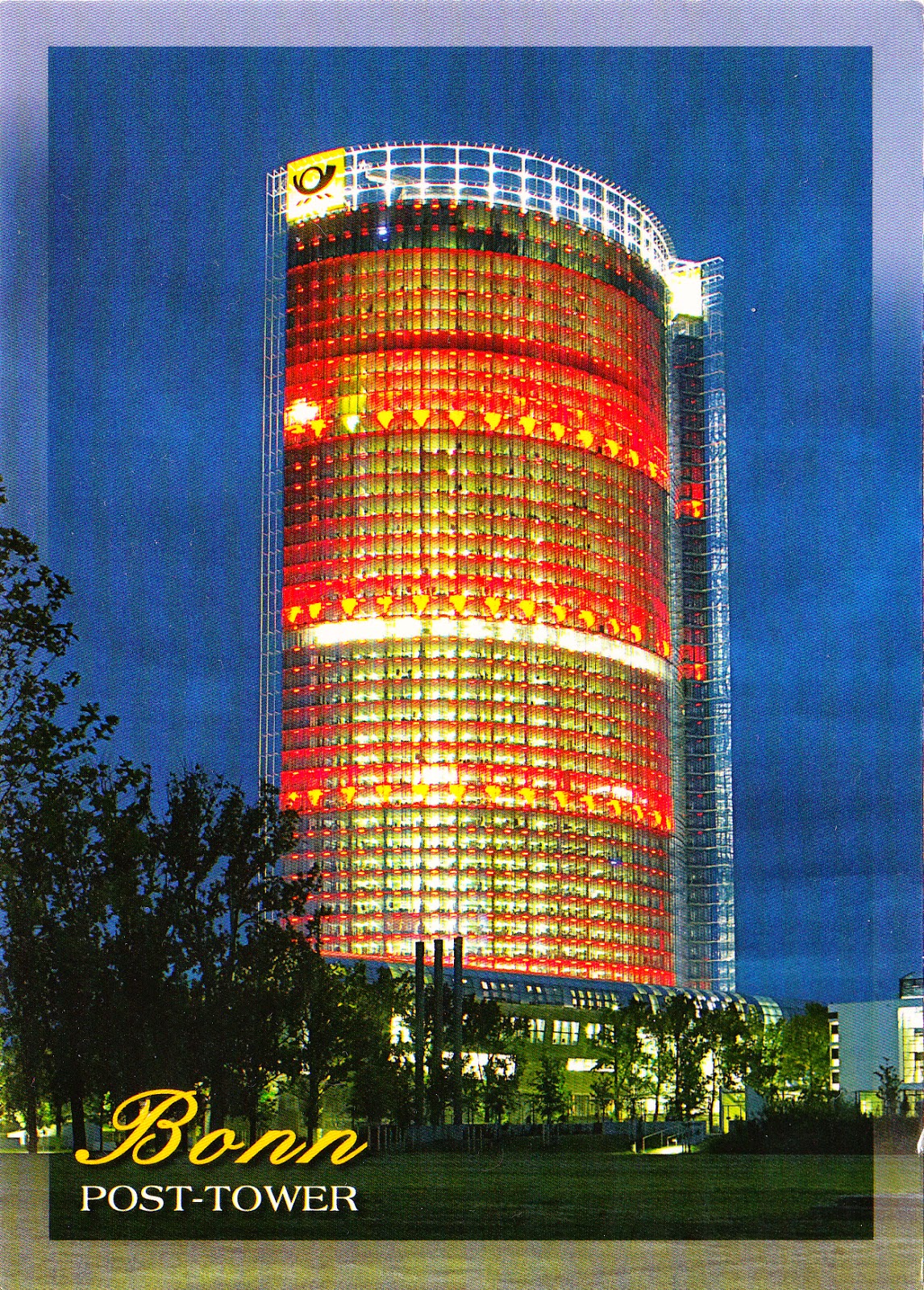 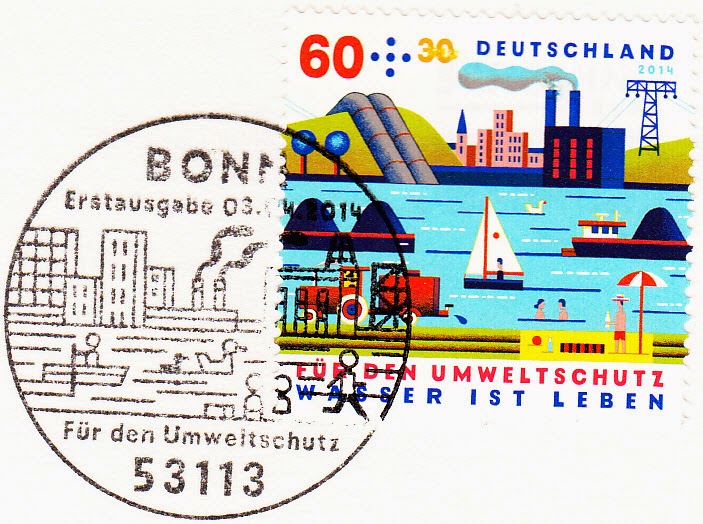 Thank You very much Kurt for sending me the card in an envelope!
Eingestellt von dustin15 um 17:59 No comments:

Today I got two postcards from Germany. I sent both to the postmarking units of the Deutsche Post to get special postmark.

One of them is a Easter postcard coming from the Easter bunny bureau in Ostereistedt. 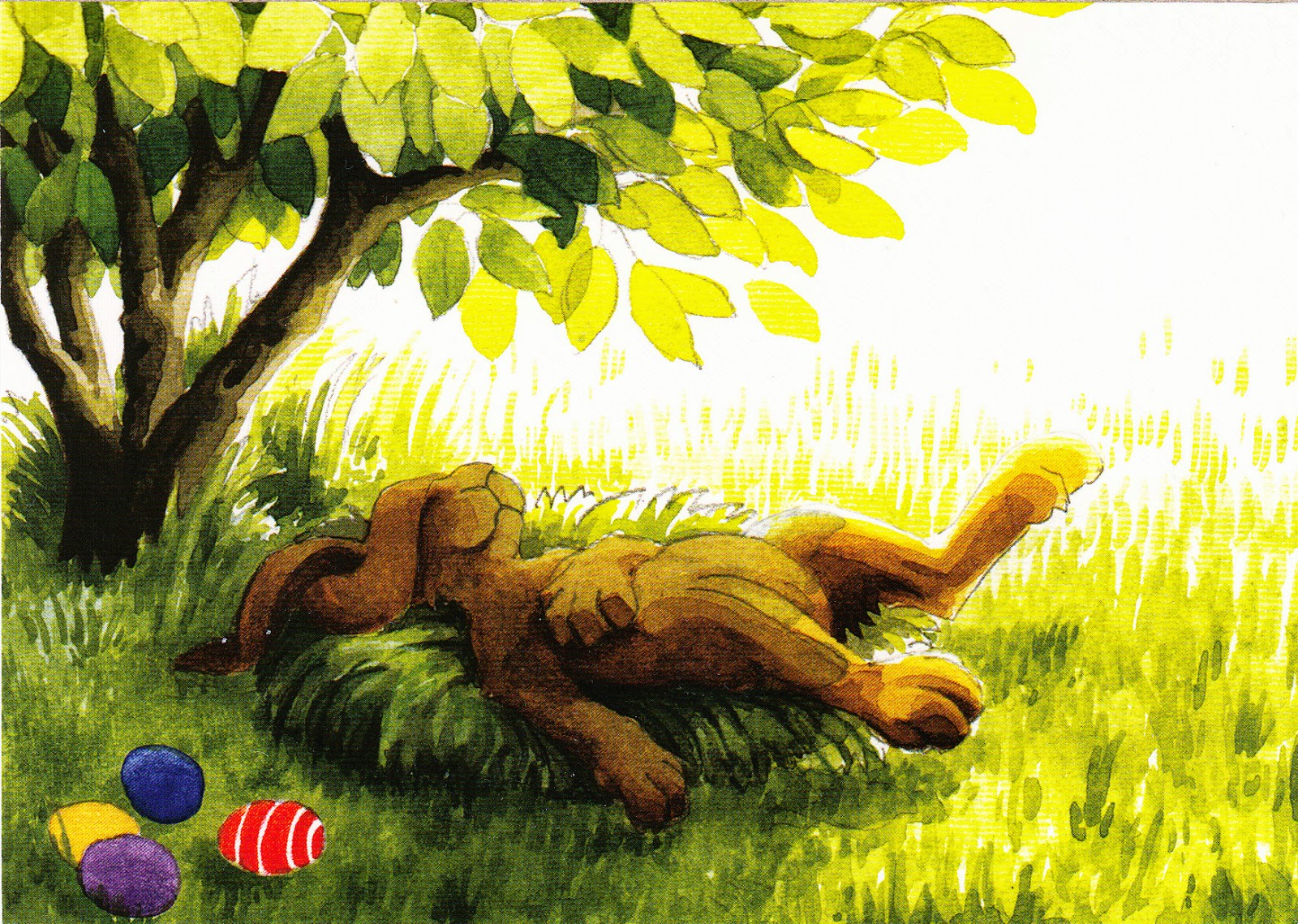 Stamp:
Easter (from set of two) (issued 01-03-2014)
with the special postmark of the bureau showing two Easter bunnies 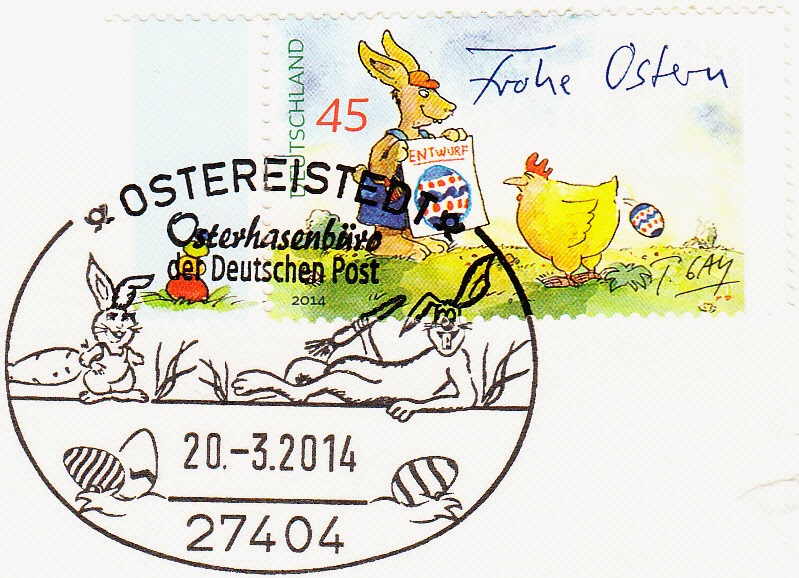 Today I got a great postcard from Sweden.

The card is a multiview from Malmö. Malmö is the capital of the Skåne County and the third largest city of Sweden. Malmö hosted the Eurovision Song Contest in 1992 and in 2013. 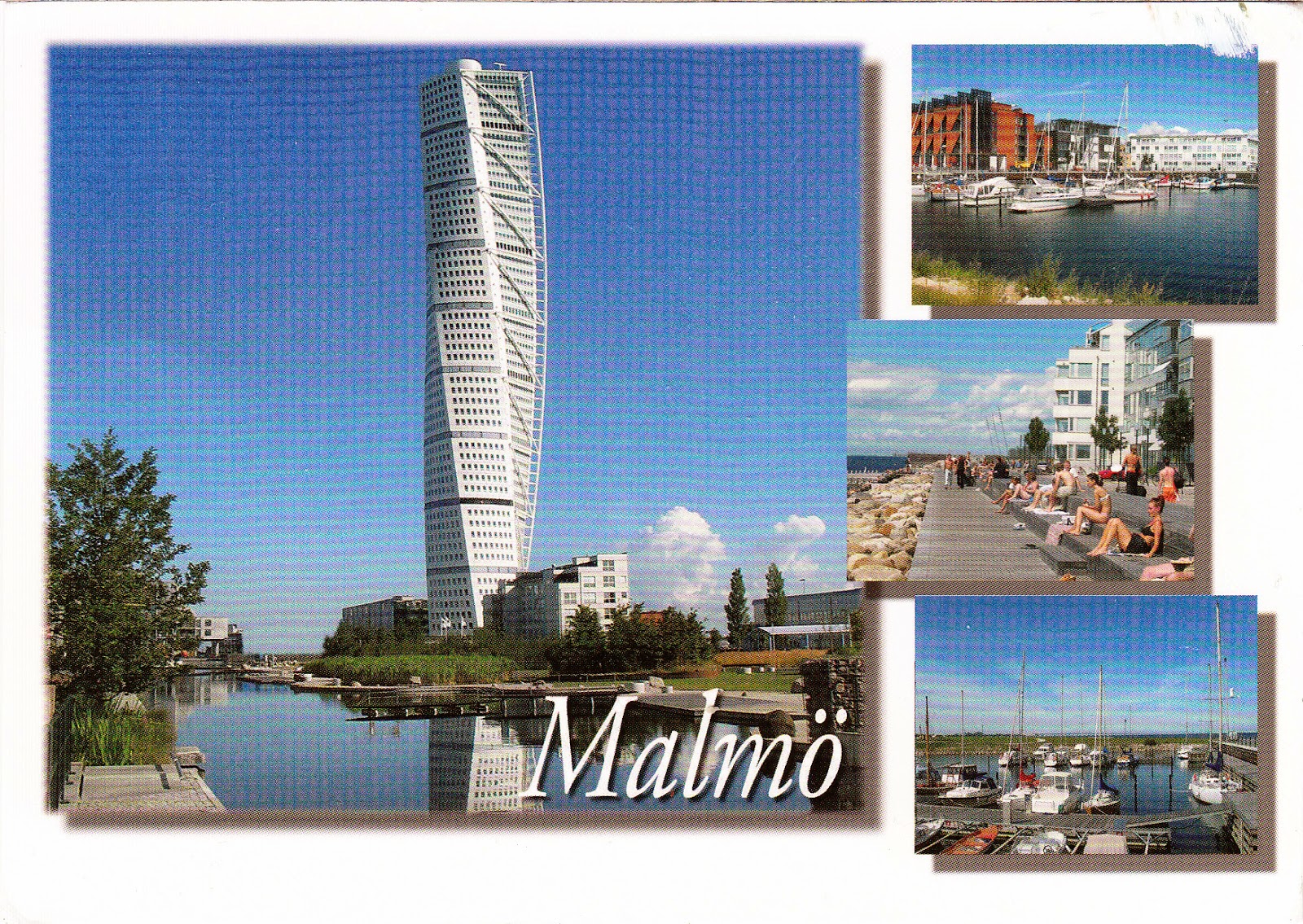 With nice stamps:
Zlatan Ibrahimović (two from set of five) (issued 27-03-2014)
Zlatan Ibrahimović was born in 1981 and is a Swedish professional footballer. He is a striker of Paris Saint-Germain and the captain of the Swedish national team.

Today I got a postcard from Germany.

The card shows the Siegestor in Bavaria's capital Munich. The Siegestor is a 21m high triumphal arch commissioned by King Ludwig I of Bavaria in 1852. The arch is crowned with a statue of Bavaria with a lion-quadriga. 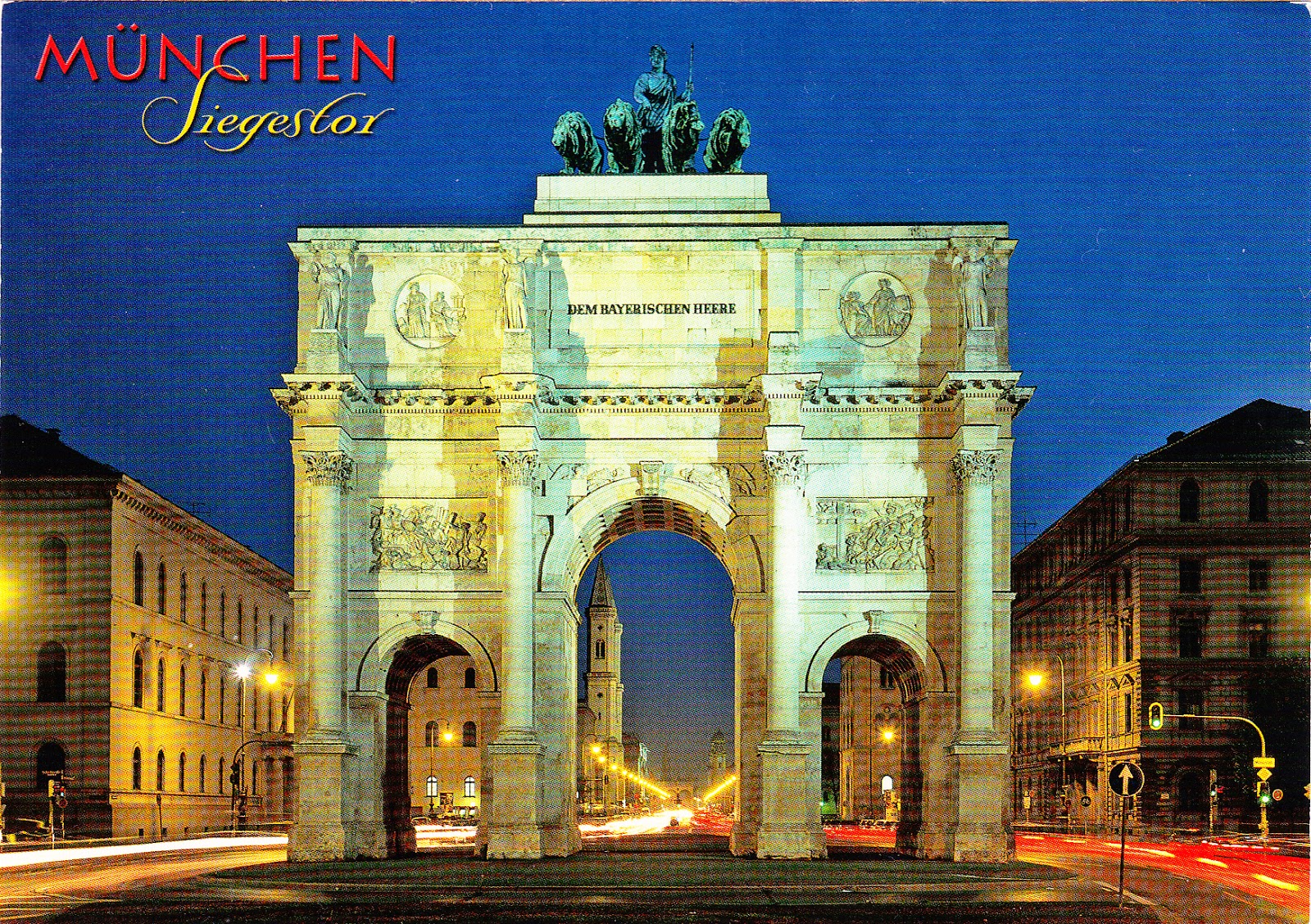 The card was sent from the Postcrossing Meet-up in Munich.
Stamp:
Fachwerkbau in Alsfeld (issued 07-04-2011) 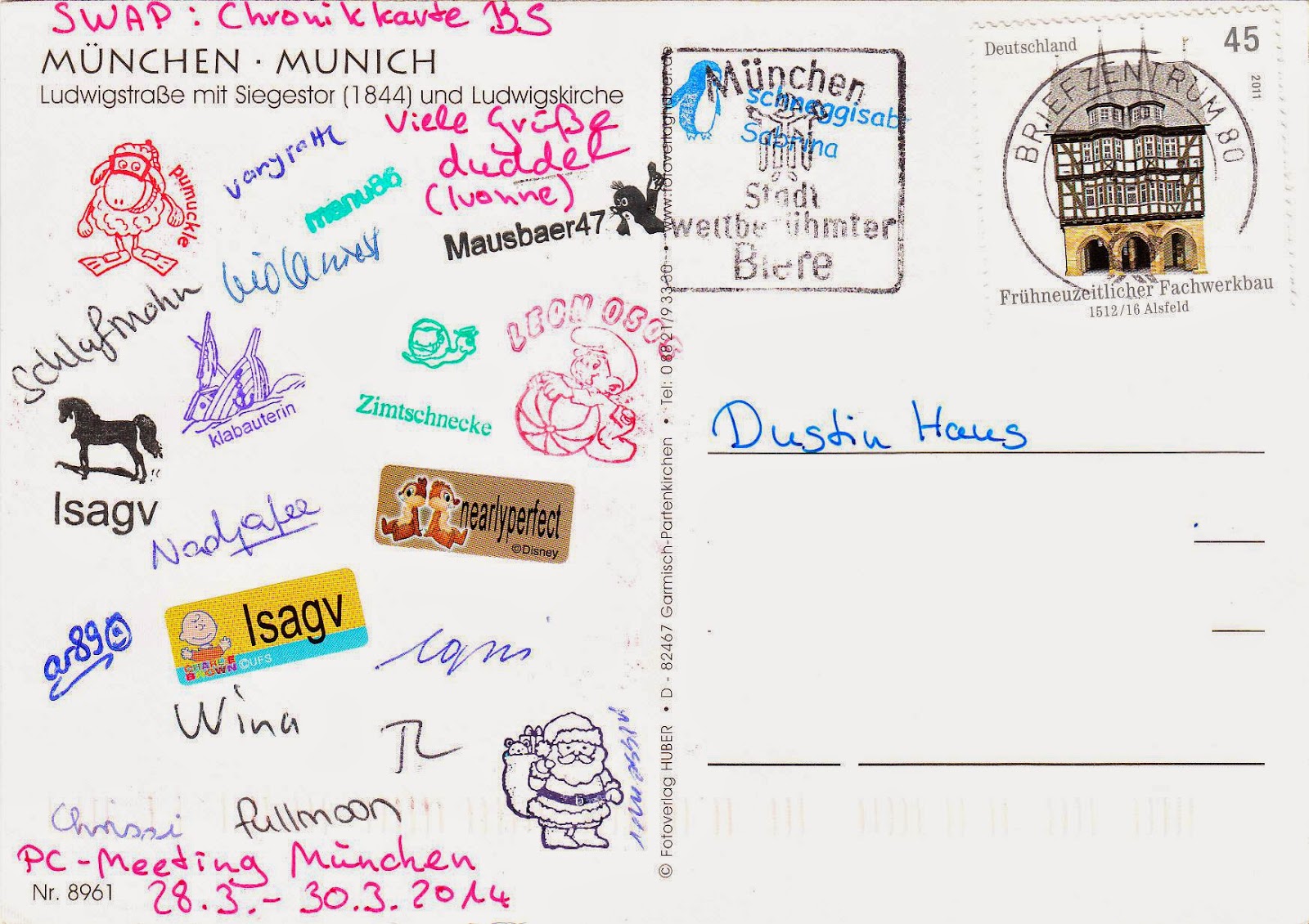 Today I got a postcard from Spain.

The card shows the zoo in Madrid. Madrid is the capital of Spain. The zoo in Madrid was opened in 1770 as Casa de Fieras and moved as Madrid Zoo Aquarium to the Casa de Campo in 1972. The zoo houses 6000 animals of 500 species. On the card is a Giant Panda. In 1978 two Giant Pandas were presented the King of Spain by China. Today there are four Giant Pandas in Madrid. The card shows also a dolphin at the dolphinarium. The dolphinarium was built in 1987 and houses today 7 bottlenose dolphins. The other animals on the card are a seal, a brown bear, Asian Elephants, Flamingos, A Gorilla with cub, an Eagle and a Tiger. 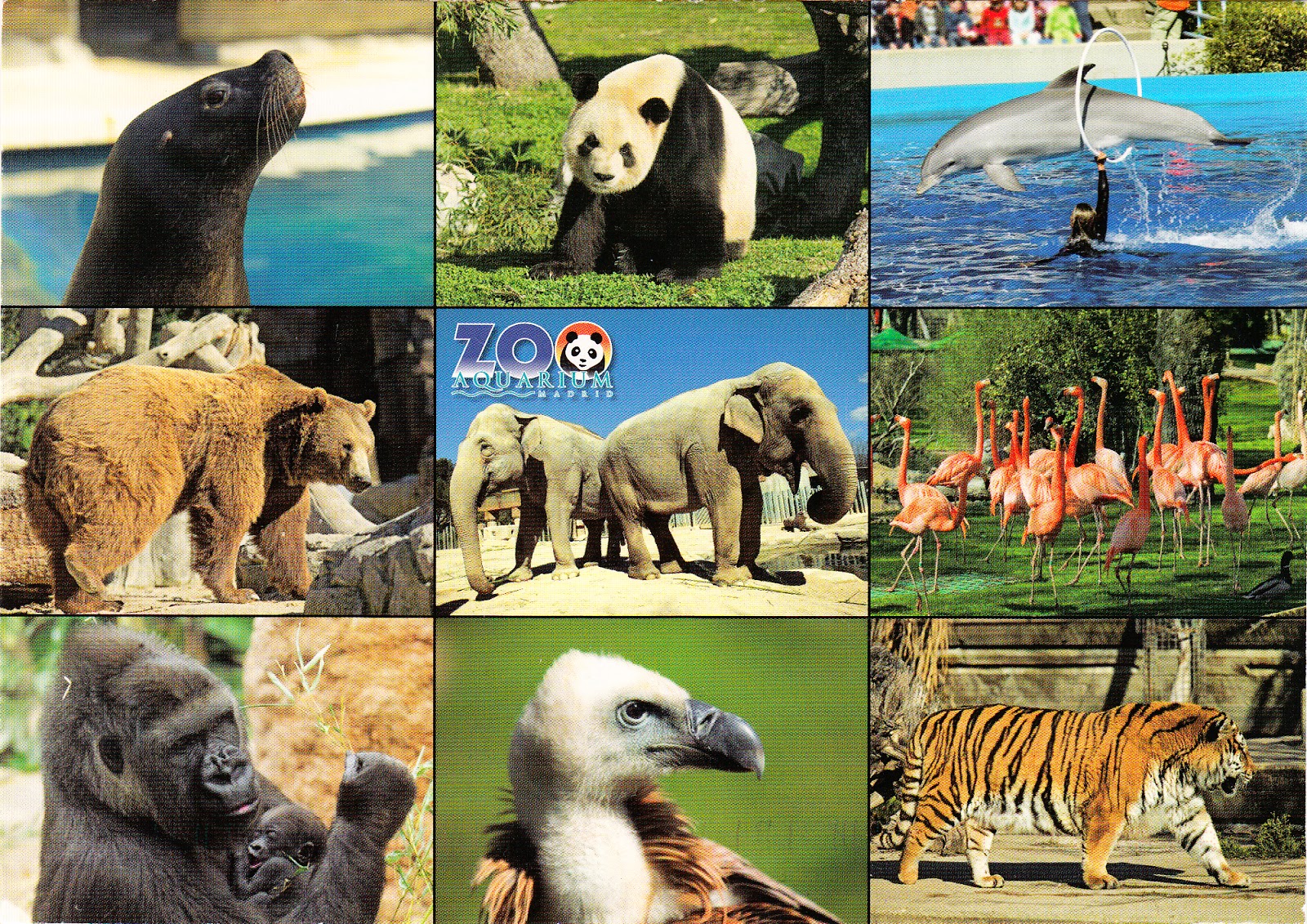