I recently bought this card of the New Year celebrations in my hometown. Time to show it now. 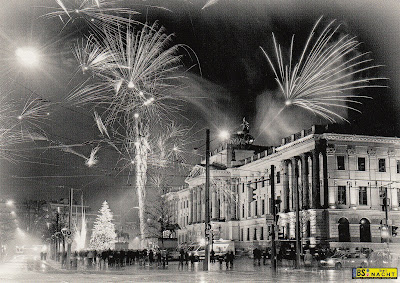 It comes from Thailand and shows the Demon Guards at the Temple of the Emerald Buddha in Bangkok. 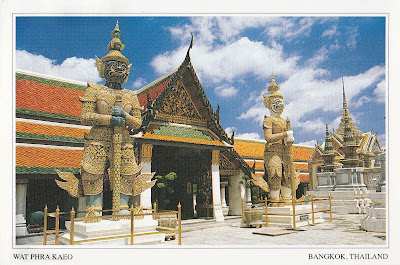 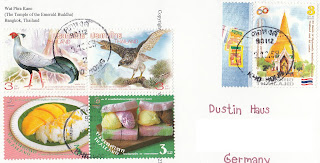 Thank You very much Kwanjira!

At the end of October I was in Istanbul.

Istanbul was founded in the 7th century BC. It was the capital of the Roman, the Byzantine and the Ottoman Empire. The city is located on both sides of the Bosporus in European Thrace and Asian Anatolia. Istanbul is the largest city of Turkey and the 23rd largest of the World. It is also one of the ten most visited cities in the World. In 2010 was Istanbul the European Capital of Culture. Since 1985 are the Historic Areas of Istanbul on the UNESCO World Heritage List.

When I was there I sent two cards to myself, but until I only got one of them. Actually I wanted to wait to show both cards at once, but now I think that second one will never arrive.

The one that arrived shows the Hagia Sophia. The Hagia Sophia was built between 532 and 537. It is considered to be the last grand building of the late antiquity and was used as main church of the Byzantine Empire. It was used as coronation church of the Byzantine emperors and was a centre of the Orthodoxy. After the Ottoman conquest of Istanbul it became the main mosque of the Ottomans. Many mosques later reproduced the style of the Hagia Sophia. It is used as museum since 1931. 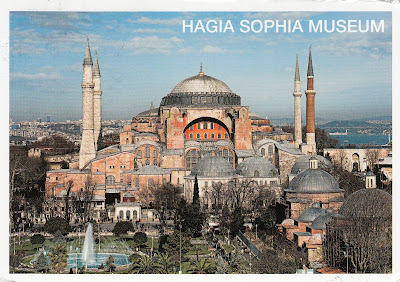 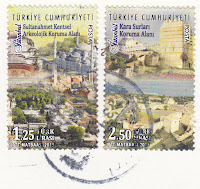 At the museum shop of the Hagia Sophia I also bought three cards showing the interior. The cards show a selection of the mosaics, a view of the nave as seen from the gallery and the apse mosaic showing Virgin Mary with Child Christ. 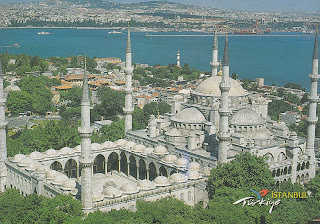 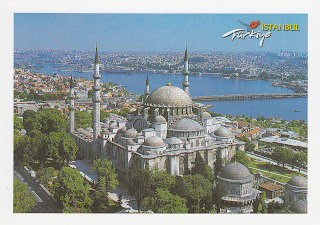 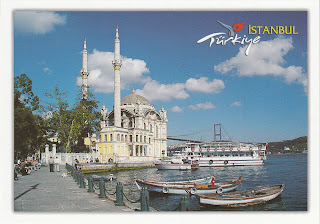 In Istanbul I also visited the Topkapı Palace. The construction of the Topkapı Palace started shortly after the Ottoman conquest of Istanbul and between 1465 and 1856 it was the mayor residence of the Ottoman sultans. It has four courtyards and contains important holy relics of the Muslim World. Since 1924 it is a museum.
One card of the palace I bought in the city. It shows the Ceremonial Gate of the palace, a diamond from the palace's collection, an Ottoman military band and the Topkapı Dagger. Also in the official museum shop I bought some cards showing an aerial view of the palace, the Prophet's Sword, the Topkapı Dagger, a portrait of Sultan Mehmed II, the armour of Sultan Mustafa III and the enthronement ceremony of Sultan Selim III. 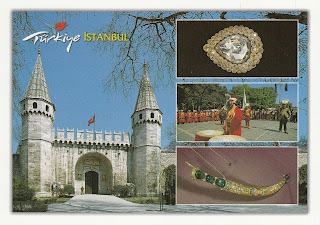 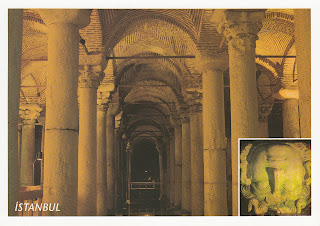 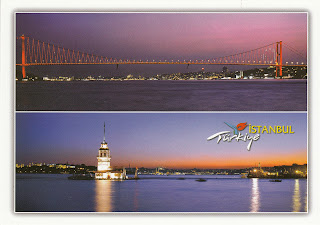 I also bought two cards showing İznik tiles. İznik pottery was produced in the Anatolian town İznik between the 15th and 17th century. The production was supported by the Ottoman court. İznik tiles are used in many buildings in Istanbul as decoration.

Another card I found shows the Whirling Dervishes of the Mevlevi Order. The Mevlevi Order was founded in 1273 and is today known for its whirling dances, which are today a popular tourist attraction. Actually the dancers needed a long training, which also included the ethics, codes of behaviour and beliefs of the order, to learn the dance, which can last for several hours, but today it is mainly shortened and focused on the dance and music. Since 2008 is the Mevlevi Sema ceremony an Intangible Heritage of the UNESCO. 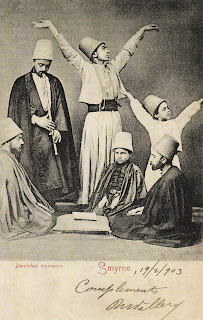 Four card I bought in Istanbul show Atatürk. Mustafa Kemal Atatürk was born in 1881. During World War I he was commander during the Defence of the Gallipoli peninsula. In 1923 he founded the modern Republic of Turkey and was until 1938 its first president. Since 1934 he is officially called Atatürk, Father of the Turks, and until today he is a symbolic figure. He died in 1938.

Today I got four postcards: one from Belgium, one from Japan, one from France and one from Italy.

The card from Belgium shows a Giant Panda at Pairi Daiza. Pairi Daiza is a zoo and botanical garden in the Walloon municipality Brugelette. The zoo was opened in 1993. It is a member of the European Association of Zoos and Aquaria. Since 2014 houses the zoo two Giant Pandas. 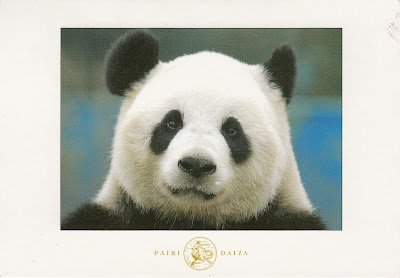 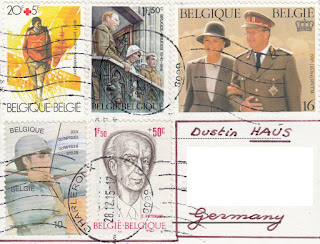 Thank You very much Johan!

Today I got four postcards: one from Italy, one from Belgium, one from Japan and one from France.

The card from Italy shows the Sacrario di Redipuglia. The Sacrario di Redipuglia is the largest military memorial of Italy and contains the remains of 100000 killed soldiers of World War I, both from the Austro-Hungarian Empire and from Italy. It was inaugurated in 1938. It is located in Fogliano Redipuglia on the slopes of the Monte Sei Busi, which was hard-fought during the Battles of the Isonzo as it offered an access to the Alpine Front and the Austro-Hungarian town of Trieste. 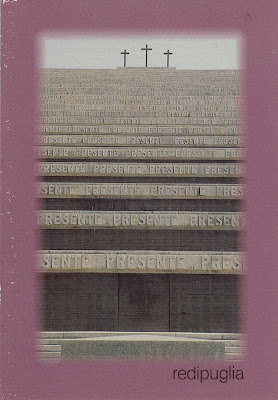 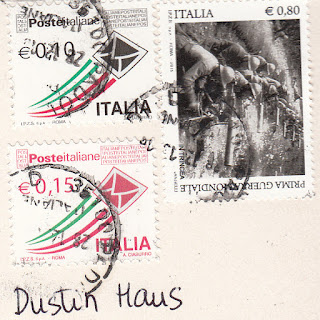 Thank You very much Cristina!

Today I got four postcards: one from France, one from Italy, one from Belgium and one from Japan. 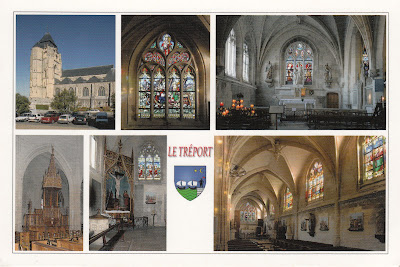 With a great stamp:
Conférence Paris Climat - COP21 (issued 25-11-2015)
It is a joint issue with the United Nations.
Between the 30th November and the 12th December the United Nations Climate Change Conference was held in Paris. It was the 21st conference of its kind. The result of the conference is the Paris Agreement, a global agreement on the reduction of climate change.

Today I got four postcards: one from Japan, one from France, one from Italy and one from Belgium.

The card from Japan is a Christmas card. 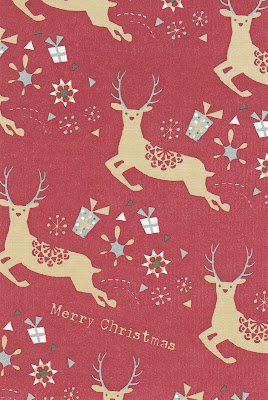 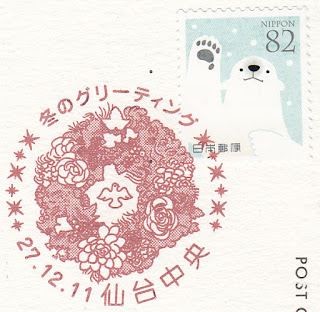 Today I got not only four postcards but also a cover from Indonesia.

Inside were two cards from Indonesia showing the Tanah Lot Temple on Bali and a Wayang Kulit puppet play.

Also two Indonesian banknotes were contained in the cover. 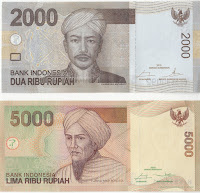 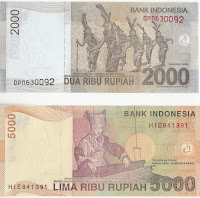 And also a stamp pack was inside. See the stamps here. 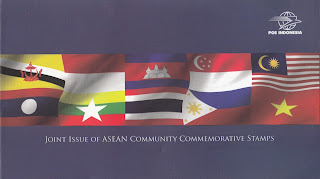 Thank You very much Wildan!

Today I got two cards from Germany.

One of them is the Chronicle card of Trier. According to the legend Trier was already founded in 2050 BC and is thus considered to be the oldest city in Germany. In 117 Trier, then known as Augusta Treverorum, became the capital of the Roman province Belgica Prima. In 275 the city was destroyed by the Franconians, but soon had another heyday as centre of trade and wine growing. Between 286 and 392 was Trier a residence of the Western Roman emperors. In the 3th century it became the seat of the first German diocese. From the 12th century until 1806 was the bishop of Trier prince-elector of the Holy Roman Empire. In 1815 Trier became a part of Prussia. During World War II the city was damaged. Since 1946 it is a part of the German State of Rhineland-Palatinate. Since 1986 are the Roman Monuments, including the Porta Nigra (upper right corner), and the Cathedral of St Peter and Church of Our Lady in Trier (upper row middle) on the UNESCO World Heritage List. 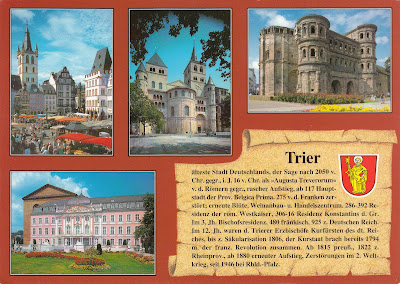 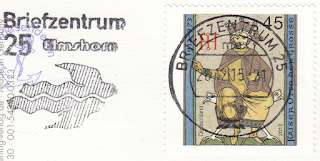 Thank You very much Maike!