On Monday I got two postcards from Germany.

One of them is Papersisters' German Landmark postcard of Bavaria. Bavaria is one of the States of the Federal Republic of Germany bordering on Thuringia, Saxony, the Czech Republic, Austria, Baden-Württemberg and Hesse. It is the largest German State and the second-most populated. Munich is the capital and largest city of Bavaria. Other big cities are Nuremberg, Augsburg, Regensburg, Ingolstadt, Würzburg, Fürth and Erlangen.

Among others the card shows Neuschwanstein Castle, the Frauenkirche in Munich and the Zugspitze. 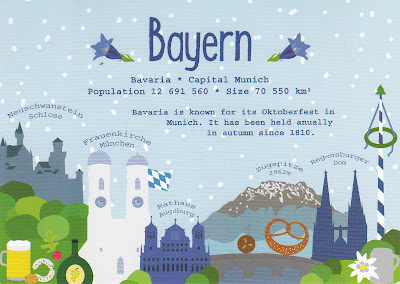