Yesterday I got three postcards: two from Germany and one from Estonia.

One of the cards from Germany is the Chronicle card of Dresden. Dresden was first mentioned in 1206 and got the town privileges in 1216. Between 1274 and 1918 it was a residence town. Under Augustus the Strong it became a centre of art and culture. Between 1806 and 1918 it was the capital of the Kingdom of Saxony. During World War II the city was nearly completely destroyed, but was rebuilt afterwards. After the war it became a part of the German Democratic Republic and since 1990 is Dresden the capital of the German State of Saxony. 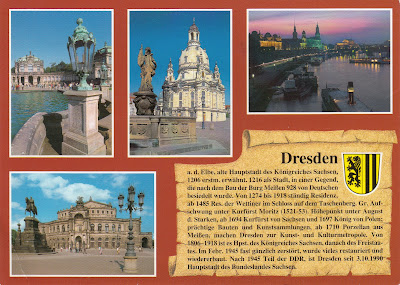 Thank You very much Nadine!