My Trip to Paderborn

On Wednesday I was in Paderborn. It was the first time that I made a longer journey by train since Covid-19 started here in Germany in March. I spent more than twice as much time in the train on that day than I had in Paderborn, but it is still nice to be on the rail again.

Paderborn is a big city in the German State of North Rhine-Westphalia. First mentioned in the late 8th century, it is named after the river Pader, which runs for its whole length of 4km through the city and which is thus the shortest fairly wide river in Germany. Shortly after the first mention a diocese was founded in the city. In 1930 it was promoted to an archdiocese.

Paderborn Cathedral was my first place to go on my trip. It is the cathedral of the Archdiocese of Paderborn and dates back to the 13th century, although churches on the the same site have existed since the 8th century. Originally built in the Gothic style, the interior was replaced by Baroque artworks in the 17th century. It was destroyed during World War II, but later it was rebuilt. Already since the 9th century Paderborn is home to the remains of Saint Liborius of Le Mans. 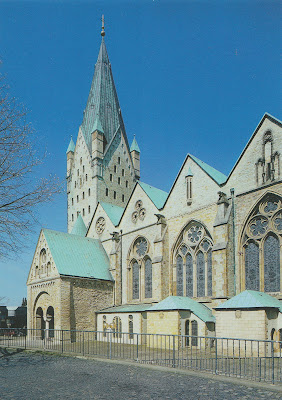 Located in a cloister's inner courtyard is the Window of Three Hares, which is one of the most famous features of the cathedral and actually even of the whole city of Paderborn. I saw it, but have to say that it is not really impressive. 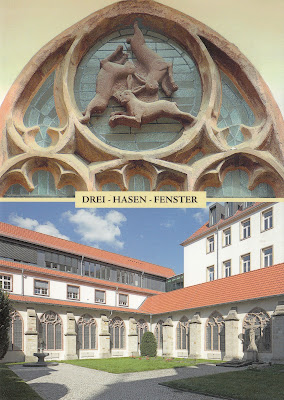 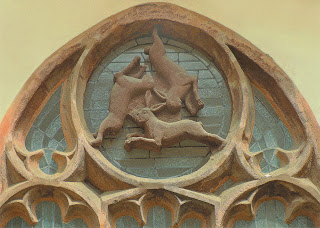 The Imperial Palace of Paderborn might not be as impressive or famous as the cathedral, but it is actually an important place of European history. It was originally built by Charlemagne and became the site of the first Frankish imperial assembly on Saxonian territory in 777. Destroyed shortly after and quickly rebuilt, the important meeting took place in 799. In that year Charlemagne met Pope Leo III in Paderborn, who had to flee Rome, and here they might or might not have decided upon Charlemagne's imperial coronation one year later. Only the foundation walls of the Carolingian palace survived until this day, but an Ottonian-Salian palace was built later on nearly the same site, which admittedly was destroyed as well, but which was rebuilt in the 1970s. Today the reconstructed palace houses a museum about the site's history, which currently also houses a special exhibition about the Dead Sea's cultural history, a World's first as they say. Unfortunately the museum itself does not sell postcards, but luckily I found this one in a stationery shop. The card shows the reconstruction of the Ottonian-Salian palace and in front of it are parts of the Carolingian foundation walls. 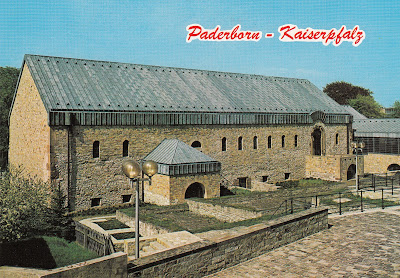 After the imperial palace I also visited the Archiepiscopal Diocesan Museum, which is the oldest diocesan museum in the German-speaking World. It was founded in 1853 and houses one of the largest and most important collections of Christian art in Germany. The museum's building was originally designed by Gottfried Böhm, who got the Pritzker Prize in 1986, and was opened in 1975. However the building was more an artwork than a working museum and brought conservational problems due to climatic fluctuations and too much sun light, hence it was partially altered later on. I actually wanted to visit this museum first, but when I was at the entrance there was a quite long queue. I really did not expect that on a Wednesday afternoon, although it might be understandable, as the museum currently shows one of its big special exhibitions: Peter Paul Rubens and the Baroque in the North. Also when I returned later, the museum was still well-frequented, but there was no queue anymore. The exhibition deals with the Baroque changes of the Paderborn Cathedral and the influence Rubens had on them. Many loans from international museums are shown in the exhibition, which gives a good over view of the Baroque art starting from a Baroque altarpiece from Paderborn destroyed in World War II and recently restored. Surprisingly they even had postcards of artworks in the exhibition. The first one I bought shows the Baroque interior of the Paderborn Cathedral painted by an unknown artist with the Baroque altarpiece in the background. The second card shows a painting by Antonius Willemssens, who together with his brother also created the altarpiece for Paderborn. 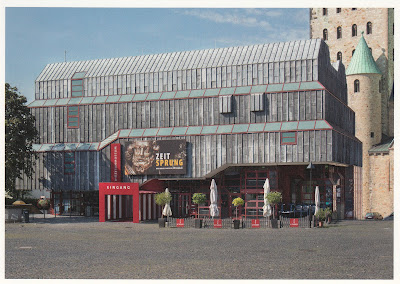 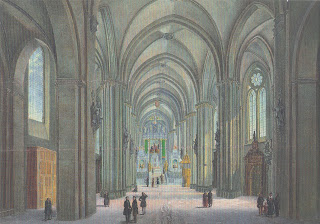 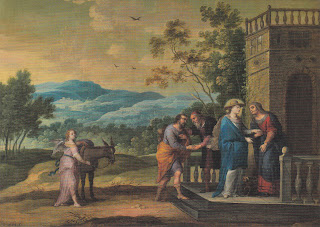 The Town Hall of Paderborn is beside the cathedral the most famous sight of the city and a masterpiece of the Weser Renaissance. Back in 2006 it was voted as one of the most popular places of the Germans, during my trip however I only went by on my way from and to the train station. 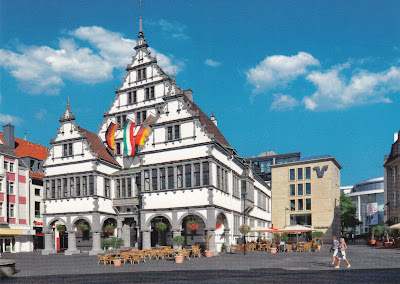