On Tuesday I got two postcards: one from Germany and my first card from Sri Lanka.

The card from Germany shows various views of Brühl. Brühl is a town in the German State of North Rine-Westphalia. In the 16th century it became the residence of the Prince Bishops of Cologne. Today it is a popular tourist destination.

The Castles of Augustusburg and Falkenlust were built in the 18th century at the behest of Clemens August of Bavaria, the Archbishop-Elector of Cologne. They belong to the most important baroque and rococo buildings in Germany. Since 1984 are both castles on the UNESCO World Heritage List.

The Max Ernst Museum (left column middle and lower pictures) was opened in 2005. It houses a large collection of paintings and sculptures of Max Ernst, the pioneer of the Dada movement and Surrealism, who was born in Brühl in 1891. 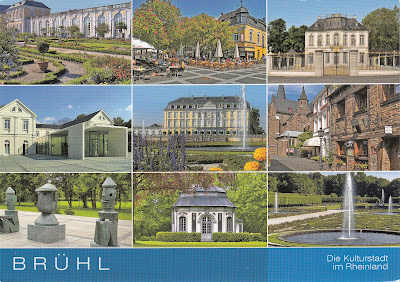